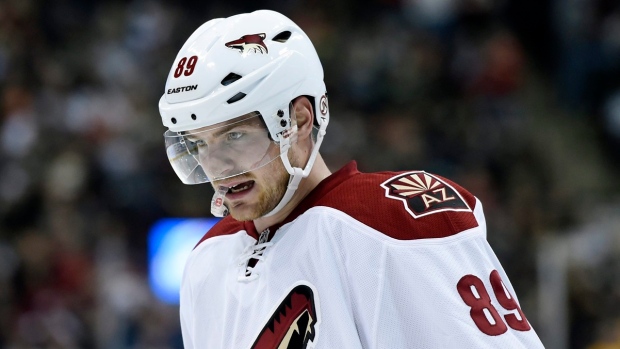 No Deal on the Table

It appears if the Arizona Coyotes had previously planned on extending the contract of forward Mikkel Boedker, they've changed their mind.

According to TSN Hockey Insider Darren Dreger, it's believed the Coyotes have "backed off a previously tabled offer," making him more likely to be traded by Monday's deadline.

The 26-year-old winger has scored 13 goals and tallied 25 assists in 59 games with the Coyotes this season. He also owns a minus-27 rating.

Boedker is currently playing on a one-year, $3.75 million contract and is set to become an unrestricted free agent this summer.

His value has been estimated as a first-round pick heading back to the Coyotes in a deal.

Boedker has scored 80 goals and 212 points across 441 career games with the Coyotes since being selected eighth overall in the 2008 NHL Draft.

While nothing is imminent, TSN Hockey Insider Darren Dreger reports there is mutual interest between the Ottawa Senators and Chris Neil to reach an extension to ensure Neil retires as a Senator.

Neil is set to become an unrestricted free agent this summer, playing in the final season of a three-year, $5.7 million deal. He currently carries a cap hit of $1.9 million.

There has been no shortage of speculation New York Rangers defenceman Keith Yandle could be traded before the trade deadline.

However, Larry Brooks of the New York post writes the Rangers are "no longer signaling Yandle's availability."

The 29-year-old is set to become an unrestricted free agent this summer and Brooks notes the defenceman has drawn significant interest from the Western Conference, notably the Dallas Stars.

Brooks speculates the Stars might send back 2013 first-rounder Valeri Nichushkin in a package for Yandle, but the Rangers are looking to add, not subtract for a playoff run.

The Rangers acquired Yandle ahead of the trade deadline last season from the Arizona Coyotes. The team paid a high price sending Anthony Duclair, John Moore, a first-round pick and a second-round pick.

Yanlde owns a cap hit of just $2.625 million because the Coyotes retained half of his salary in last year's deal. He has four goals and 29 assists in 59 games this season.

The Rangers currently sit second in the Metropolitan Division and own the third-best record in the Eastern Conference.

Space to Work With

With their two trades on consecutive days, the Toronto Maple Leafs managed to shed $6.2 million in cap hits between Shawn Matthias, Roman Polak and Nick Spaling.

As James Mirtle of the Globe and Mail writes, that cap space is likely to prove to be the Leafs' biggest asset heading toward the trade deadline. Mirtle speculates the Leafs could become a trade partner for teams such as the Chicago Blackhawks, St. Louis Blues, Washington Capitals, Tampa Bay Lightning, Pittsburgh Penguins and Los Angeles Kings, who all are playoff contenders close to the cap.

Mirtle writes the Leafs will be willing to take a bad contract, such as that of Bryan Bickell of the Blackhawks ($4 million through next season), for the price of a prospect or a draft pick. The Blackhawks, then, could acquire a high-salary player for their playoffs, such as Eric Staal.

Though the Leafs may be willing to buy bad contracts, Mirtle notes the team still has selling to do, with pending unrestricted free agents P.A. Parenteau and James Reimer leading the list of names in play.

Trade Him While He's Hot?

Vancouver Canucks winger Jannick Hansen has already scored a career-high 19 goals this season and is eight points away topping his career-high of 39 from the 2010-11 season.

With the Canucks sitting outside of a playoff spot, Ben Kuzma of the Vancouver Province wonders if the Canucks should sell Hansen while his value at a peak level.

Hansen owns an attractive contract with a cap hit of just $2.5 million and two years left on his deal.

Kuzma lists the Chicago Blackhawks as a potential landing spot for Hansen, citing 2012 second-rounder Ville Pokka as a fitting return.

According to Kuzma, Canucks general manager Jim Benning is looking to make his team younger and faster at the trade deadline – loading up on draft picks is not part of the plan.