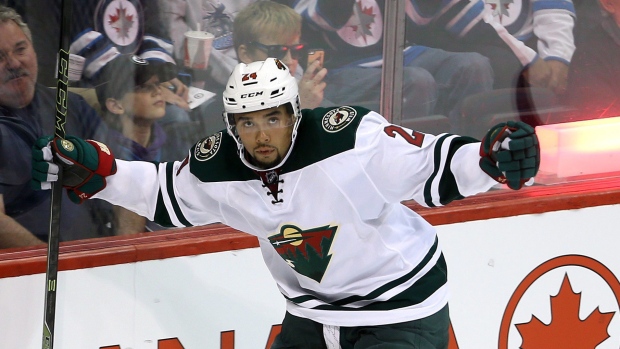 Life on the trade block

Minnesota Wild defencemen Matt Dumba and Jonas Brodin are learning to live with their names on the trade block.

According to the Minnesota Star Tribune, the defencemen have both had their names bounced around in trade talks as the team has struggled through a scoring slump.

The Star Tribune reports Brodin was offered to the Columbus Blue Jackets for Ryan Johansen before he was traded to the Nashville Predators, and Dumba has associated with a trade to the Tampa Bay Lightning for Jonathan Drouin.

Wild general manager Chuck Fletcher told the paper the team was not going to overreact and forced trades, but also said no one on his roster was safe from being moved.

Brodin, the 10th overall pick of the 2011 NHL Draft, has one goal and four assists this season, while Dumba, selected seventh overall in the 2012 draft, has five goals and 11 points in 45 games.

Eric Staal and his agent, Rick Curran, are getting set to discuss to the future of the veteran forward with the Carolina Hurricanes.

TSN Hockey Insider Pierre LeBrun reports the two sides are set to meet prior to the end of January to discuss Staal's status moving forward.

The Hurricanes forward is set to become an unrestricted free agent in 2016, but he owns a full no-movement clause and could reject any trade.

Complicating discussions, the Hurricanes remain in the playoff race through 48 games, just two points out of a Wild Card spot.

Staal has been with the Hurricanes since the team selected him second overall in the 2003 NHL Draft and owns a $9.5 million salary this season. His cap hit sits at $8.25 million.

LeBrun notes Jeff Skinner's name could be one to watch towards the trade deadline. The 23-year-old has scored 17 goals through 47 games this season, after scoring 18 goals in 77 games last year.

Skinner is signed for three more seasons at $6 million a year.

Case for the Blues

Jeff Gordon of the St. Louis Post-Dispatch reports the high-paying contract of Vladimir Tarasenko will force the Blues to look to move other veterans on the team.

Gordon notes that both captain David Backes and defenceman Kevin Shattenkirk could be on the block as they look for raises in the near future. Backes is set to unrestricted free agency this summer, while Shattenkirk's has one season left on his contract.

The Post-Dispatch notes the Blues could look to hold on to Shattenkirk and instead move Alex Pietrangelo, who is signed through the 2019-20 season at $6.5 million per year.

At the minor league level, Gordon throws out Petteri Lindbohm and Ty Rattie as names to watch towards the deadline.

The Blues currently sit third in the Central Division, two points back of the Dallas Stars who have three games in hand.