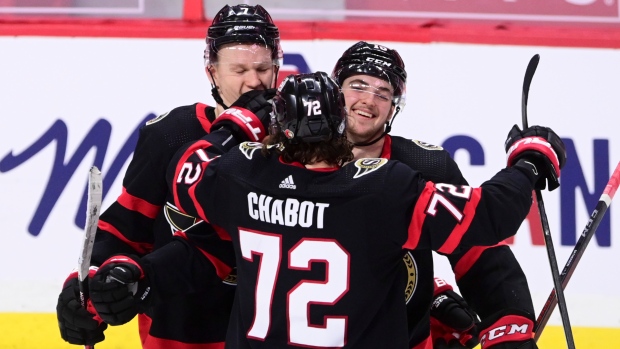 With summer officially coming to an end and training camps set to open across the National Hockey League this week, TSN is getting ready for the preseason by looking at the three biggest questions facing each of the seven Canadian franchises.

The Ottawa Senators finished sixth in the North Division last season with a 23-28-5 record and missed the playoffs. The hope is an exciting young core featuring Brady Tkachuk, Tim Stutzle, Thomas Chabot, and Josh Norris will continue to grow and take a step toward the postseason this year.

When the Ottawa Senators acquired Murray, who backstopped the Pittsburgh Penguins to two Stanley Cups in 2016 and 2017, it was with the hope he would be their present and future in goal.

Murray didn’t live up to the big expectations last season after signing a four-year, $25 million contract upon his arrival in Ottawa.

In 27 appearances, the 27-year-old recorded a .893 save percentage and 3.38 goals-against average. Durability also continued to be an issue for Murray as he missed significant time with multiple injuries.

Murray’s numbers have been on the decline three years in a row. The Sens need him to find his form while playing behind a rebuilding team that allowed 32.1 shots against per game last season.

Chabot is unquestionably Ottawa’s No. 1 defenceman. While the hope is a prospect like Jake Sanderson or Jacob Bernard-Docker steps up to skate alongside Chabot in the near future, that’s not the reality right now for the Senators.

With Chabot set to play more heavy minutes after a year in which he averaged 26:17 of ice time per game, the Sens need to find him a steady partner.

Signed as an undrafted free agent by Ottawa on May 1, 2020, Zub had three goals and 14 points in 47 games while averaging 18:23 of ice time as a rookie last season, showing promise playing alongside the since-departed Mike Reilly.

Chabot, whose ability to create offence from the back end is integral to the Senators’ success, plays some of his best hockey alongside a low-risk, defensively sound partner. An example of that includes the 2019-20 season, when Chabot paired up with Dylan DeMelo, who allowed him the freedom to create.

If the 25-year-old Zub can continue to evolve into a defensively sound player, he could be the ideal short-term option to play alongside Chabot and allow him to do what he does best.

3. Who will replace Evgenii Dadonov as third-line right winger?

The Evgenii Dadonov era did not last long in Ottawa. Just one season into his three-year, $15 million contract he signed as a free agent in 2020, the 32-year-old was dealt to the Vegas Golden Knights.

With Dadonov gone, there is an open spot at right wing on the third line. Among the candidates is 21-year-old Egor Sokolov, who had a strong debut in the AHL last season with 15 goals and 25 points in 35 games with the Belleville Senators.

Another option is centre Logan Brown, a player whose time to crack the NHL roster is ticking. Drafted 11th overall in 2016, the 23-year-old has played in just 30 NHL games since being selected, recording a goal and eight assists.

With Josh Norris, Shane Pinto, Colin White, and Chris Tierney most likely Ottawa’s four centres heading into the season, Brown’s best shot at earning an NHL roster spot might come on the wing.

A veteran option to fill the spot could be Tyler Ennis, who signed a PTO to join the Senators for training camp. The 31-year-old veteran had three goals and nine points in 30 games last season with the Edmonton Oilers. He previously played for the Senators in 2019-20, scoring 14 goals and 33 points in 61 games before being dealt to Edmonton at the trade deadline.