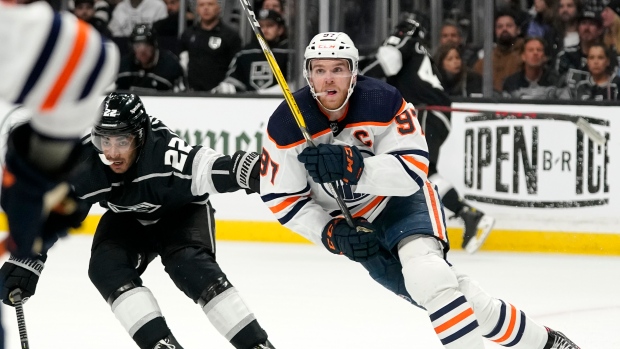 Once in a blue moon, there are otherworldly performances in the National Hockey League. We expect players the calibre of Edmonton’s Connor McDavid to perpetually raise that bar. They are simply that talented.

McDavid raised that bar once more in the first round.

In a surprisingly competitive seven-game series against the Los Angeles Kings, McDavid put together one of the best individual performances I can recall. At times it looked like his body had been taken over by a force in the universe – distinctly faster and stronger than everyone else on the ice, with lethal execution to boot.

And this is in the playoffs against a Kings team who exhibited an ability to slow teams down this season, armed with perhaps the NHL’s best shutdown player in Phillip Danault. (As an aside, it’s hard to say enough about how great Danault was both during the regular season and playoffs; Los Angeles finding an elite shutdown defensive forward who suddenly can score 30 goals in a season is remarkable. Colour me impressed!)

Edmonton was the more talented team in this series, but McDavid was the difference. That’s no slight to goaltender Mike Smith, who was – save for a few puck-handling gaffes – strong in net. And players like Evander Kane and Leon Draisaitl (a combined 12 goals) were invaluable.

But McDavid was on another level. He had four goals and 10 assists, played defencemen-level minutes (37 per cent of available ice time), and prevented the Kings from winning any of the minutes when he was on the ice.

Territorially, this was a bloodbath:

How did this territorial domination effect the series? I would say that without McDavid, Edmonton is at real risk of losing a series to perhaps the weakest team of the 16 that qualified for the postseason. But having the best player in the universe tends to help balance things out: 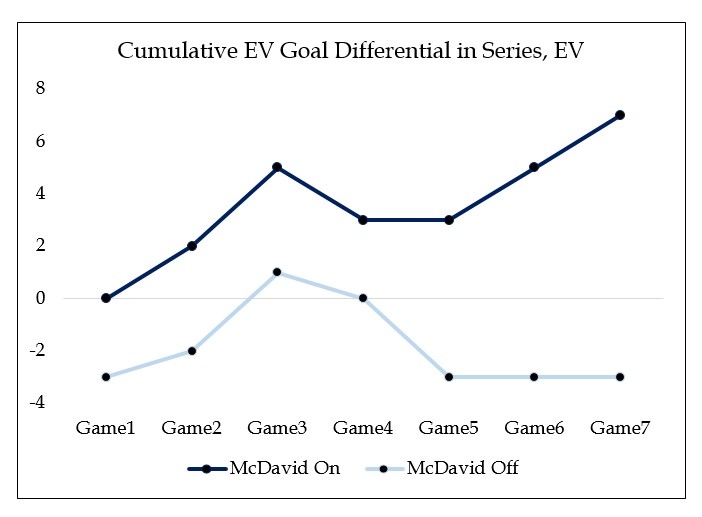 Simply put: Los Angeles was the better team if you measured bottom-nine forwards versus bottom-nine forwards. That’s true in possession time, true in scoring chances and true in goals. But Edmonton’s first line’s obliteration of the Kings was so exceptional, it balanced the ledger and then some.
After Saturday night’s showing, I was curious how McDavid’s dominance of Los Angeles would hold up against some of the better playoff performances we have seen over the years. If we look at net expected goals (blind to goaltending, important in this context) over the past 15 years, we’ve seen plenty of dominant skaters – from Pavel Datsyuk’s Detroit Red Wings, the two-time defending Stanley Cup champion Tampa Bay Lightning, and the decade-of-dominance team in Washington D.C.

And yet, none of those skaters can hold a candle to what McDavid did in this opening round: 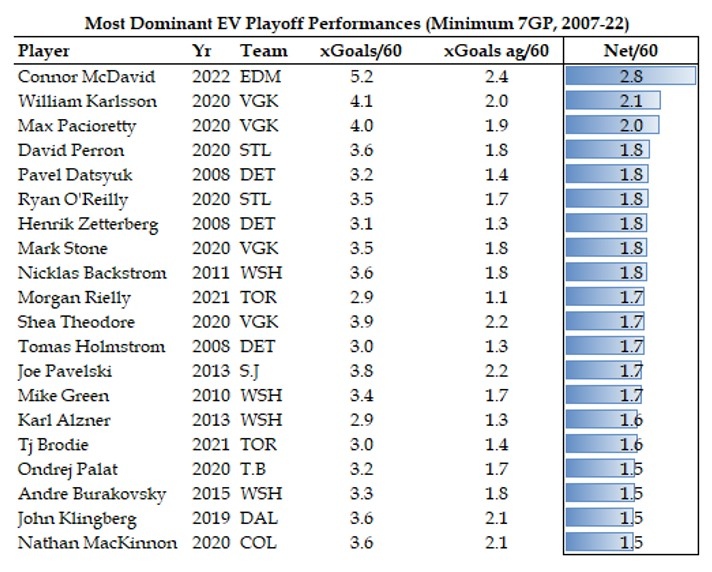 Whether it was Datsyuk’s wizardry in 2008 or what Nathan MacKinnon individually accomplished in the bubble over the course of two rounds in 2020, we have a clear baseline for what we consider exceptional, one-sided hockey.

The best performances over the years have seen players create 1.5 to 2.0 of an expected goal advantage for every 60 minutes played, which is the type of stuff you see from Stanley Cup-calibre teams. McDavid just posted a +2.8. (If points are your thing, don’t worry, it’s the same conclusion. McDavid is averaging 5.6 points per 60 minutes, which again, is the best number we have seen in 15 years.)

Perhaps teams will be incrementally more effective at slowing McDavid down over the rest of the postseason. Certainly, the Colorado Avalanche (to name but one team), who remain in Edmonton’s way for the time being, are armed with the weaponry to do just that.

But, after what we just witnessed over the past two weeks, who is foolish enough to bet against McDavid?