In the last month, two players have signed max-term contracts with their respective teams. The Edmonton Oilers landed Ryan Nugent-Hopkins at eight years, $41 million in June and the Minnesota Wild locked in Joel Eriksson Ek on an eight-year, $42 million contract over the weekend.

​I found this particularly interesting, as they were the first two max-term contracts to be signed during the global pandemic. Before the pandemic struck, max-term contracts were very much in style, with organizations increasingly acknowledging the importance of long-term retention after drafting and developing a player. From 2016-19, we saw 33 skaters sign eight-year deals – a sharp uptick in risk absorbed by front offices relative to years past: 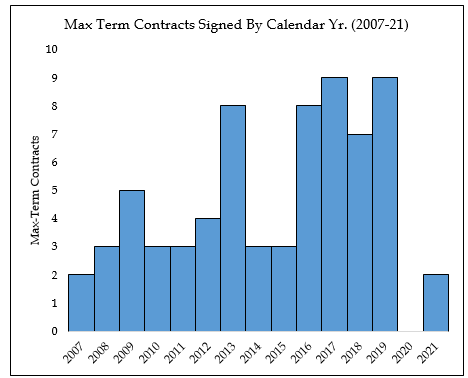 Organizations rarely want to go this long on skaters; more so in the pandemic era, where expectations for increases to the salary cap are expected to be muted for quite some time. There are two exceptions to this rule, historically speaking.

The first is when an opportunity to sign a true superstar manifests itself – in these cases, you are prepared to throw a bag of money at a player for as long as practically possible. The second is when a front office thinks it can trade term for smoothing down a cap hit. Edmonton’s deal for Nugent-Hopkins is a great example of this – a quality player the team could ill-afford to lose, but also a player the team couldn’t sign for a large annual cap hit due to their current cap situation.

Perhaps the most critical question an organization must answer when considering this deal: what type of performance degradation can be reasonably expected over the life of the deal. There are a considerable amount of variables that can alter the math – a player’s core skill set, durability and age at the time of the signing always factor in. But the reality is that in most situations, performance is dwindling on the second-half of the contract. More than thirty eight-year deals have been signed and have advanced into the back half of the deal at this point (2007-21) – the boxplot below shows at a macro-level how much performance can deteriorate. (Note: I’m using Goals Above Replacement as my proxy for performance, but other statistical measurements show similar downward trends) 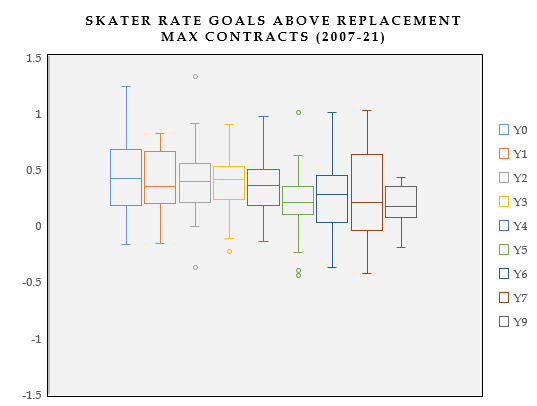 Just glancing at the graph, that’s considerable downward momentum in the second-half of the contracts. If we take the average performance by year in these long-term deals and measure it against average performance of the same group from the time they signed their contract, you see degradation north of 50 per cent by the time the contract is heading towards expiration: 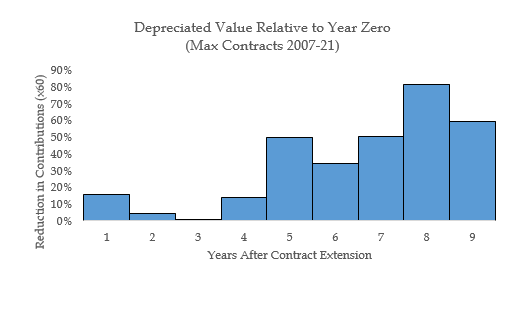 No two contracts are the same, but that sort of trend is what general managers have to factor in when going long on a player. It’s not that degradation isn’t expected – it’s more so how to reflect that appropriate in a contract, ensuring a team’s salary cap situation is managed and an aging player isn’t anchoring roster performance at the tail end of his deal.

Case in point: let’s take a look at a handful of long-term contracts signed many moons ago and how they have fared over time. Duncan Keith (Chicago), Zach Parise (Minnesota) and Shea Weber (Nashville) all signed long-term deals – Keith’s deal was in the middle of a season, the other two signed in off-seasons. None of these contracts, expectedly, are healthy on a team’s books right now. Yet all three were among the top-five or so players at their respective positions when those contracts were signed. I also overlaid a contract that has held up quite better than most, and that’s Patrice Bergeron in Boston.

Even with Bergeron (whose record really is without blemish), consider the slope year-over-year: 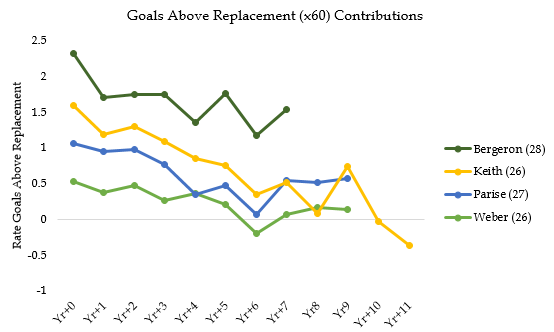 Long-term contracts aren’t going away. They provide ample security for both players and the club. But how those contracts end up creating value is entirely contingent on what front offices can stomach in terms of capital outlay from the onset of the contract, and how well they insulate the deal in order to avoid future salary cap quagmires.

There should be a baseline expectation that performance is going to dwindle. The question is how much you are willing to pay for those great years up front, and how much you can insulate yourself in the event a contract goes sideways.