'For us, I think the rebuild is over': Dorion, Smith on expectations for Sens this season

Entering his fifth season as general manager of the Ottawa Senators, Pierre Dorion is striking a different tone with the media. The organization believes the rebuild is over, and are setting expectations accordingly.

It’s an interesting gambit from the Senators’ front office, if only because there is an ocean-sized gap between having a tremendous pool of prospects at your disposal and having a talented enough team to compete at the National Hockey League level.

There is little to quibble with as it pertains to Dorion’s stockpiling of talented prospects who have dominated at lower levels – Ottawa boasts one of the league’s deepest farm systems, and that young talent has been injected into the NHL lineup in recent seasons. So much so that the Senators expect to enter this season with an average forward age just north of 23.

Dorion’s comments about the rebuild being over seemed more so a forecast than reality. He may very well be right about Ottawa’s outlook for this season. The bullish case for this youthful roster is the majority of prospects take steps forward in their developmental cycles, and a team that looked competitive at the tail end of last year continues its rise up the Atlantic Division standings.

But we have also seen front offices – in every major sport – get out over their skis when signaling the ends of rebuilds. Dorion may very well be right this team is ready to take a sizable step forward. But what if it isn’t?

There is enough data to suggest the rebuild is still very much alive in Ottawa. Consider the performance of the Senators over the past three seasons as they have matriculated through this rebuild. We have seen positive shifts in performance. But we also see a team that’s generally been underwater.

Let’s look at even-strength performance, game-over-game, for the past four seasons. This is goaltender neutral, so what we are capturing here is shot advantages adjusted for the quality of those shots: 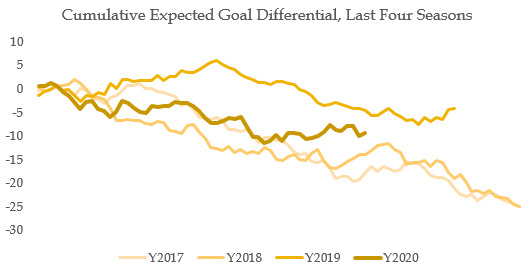 We expect negative seasons with such a young and transitional roster. But I suppose what you would have preferred to see is last season looking a lot stronger than it did. I have seen some attribute that to playing in the all-Canadian division and the absence of another truly weak team – teams that exist in Ottawa’s current division, recently in the form of Detroit and Buffalo.

What if we bring goaltenders into the mix? Same graph, but this time as a function of real goals, not expected goals: 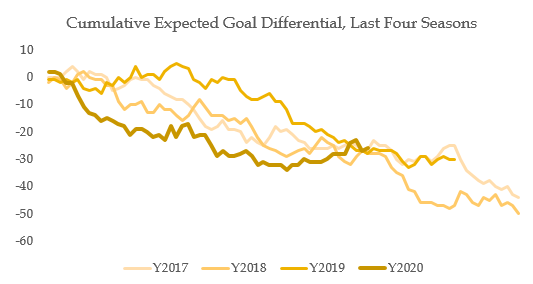 This works even worse, but we can attribute much of this to a dismal start to the season for goaltender Matt Murray. It is worth pointing out that the team rebounded nicely on the goal differential front towards the end of the season, and Murray (and the broader goaltending group for that matter) were a big part of it.

On the other hand, this is still a team that’s 26th in save percentage over this period. Expecting significant change heading into next year without a corresponding personnel change would seem ​like a bad bet.

What indicators do we historically have of rebuilds that are starting to turn in the right direction? One of the things I like to look at is the players who are playing to break-even performance (or better) over a given period. Rebuilds are always painful, but as more talent comes onboard, team performance moves accordingly.

Most of Ottawa’s roster is still underwater: 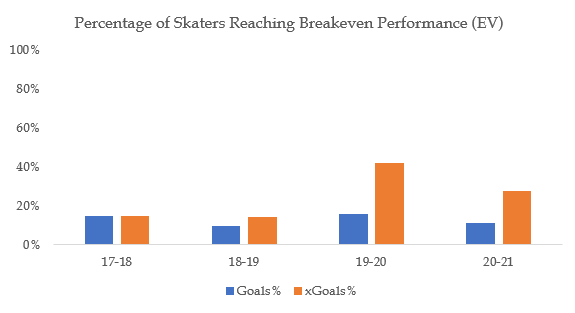 Each season, Ottawa has had a couple of skaters reach a neutral (or better) goal differential.

Last year, for example, it was breakout defenceman Artem Zub and then 21-year-old fellow blueliner Erik Brannstrom. But one thing that’s not lost on me is how only one player – surprise, surprise, it was former winger Mark Stone – has been able to reach break-even on more than one occasion. Several players in the Ottawa lineup, headlined by Brady Tkachuk and Thomas Chabot, have never cleared that bar.

Again, it’s entirely possible that this year is where it all comes together for the Senators. We have seen these players dictate games at lower levels of competition in a way that makes all of us believers, not just Dorion. But if hope and belief rests on one side, the hard data rests on the other side.

If the rebuild is over, we aren’t seeing any signs of it. Not yet anyway.