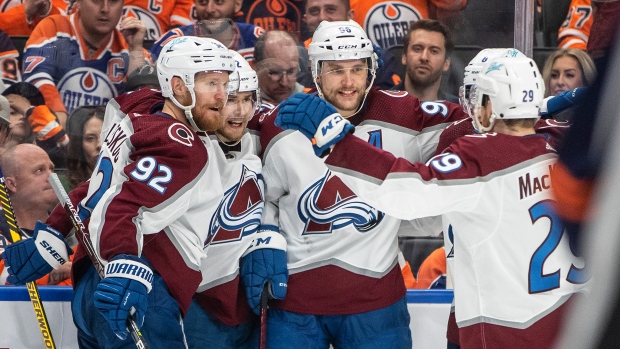 Colorado’s thrilling overtime victory in Game 4 puts the team just 60 minutes away from a Stanley Cup – a massive accomplishment for Jared Bednar’s team as they have climbed the ladder of hockey excellence.

The Avalanche still must deliver one more time in the next three games. But at some point, we must ask the question: Just how good is this Colorado team, and are we underappreciating the on-ice greatness of Bednar’s club?

Colorado has generally been a consensus favourite in the betting markets for most of the last two seasons. The talent and depth of the team is universally recognized – I thought Calgary head coach Darryl Sutter summarized Colorado up best, acknowledging that a series against Colorado would amount to a waste of eight days.

That was maybe a bit tongue-in-cheek from Sutter, but I don’t know if we are appreciating the degree of dominance exhibited by this Colorado team.

Consider the two Stanley Cup Final teams from this year – Colorado and Tampa Bay – versus other Cup winners since the 2007-08 season, or the statistical modern era. Keep in mind that there are a number of teams within this group that we would consider historically great in any time period. Mike Babcock’s Detroit Red Wings and the dynastic Chicago Blackhawks certainly fit that bill.

The table below shows net-goal and net-expected goal advantages carried over each team’s respective postseason: 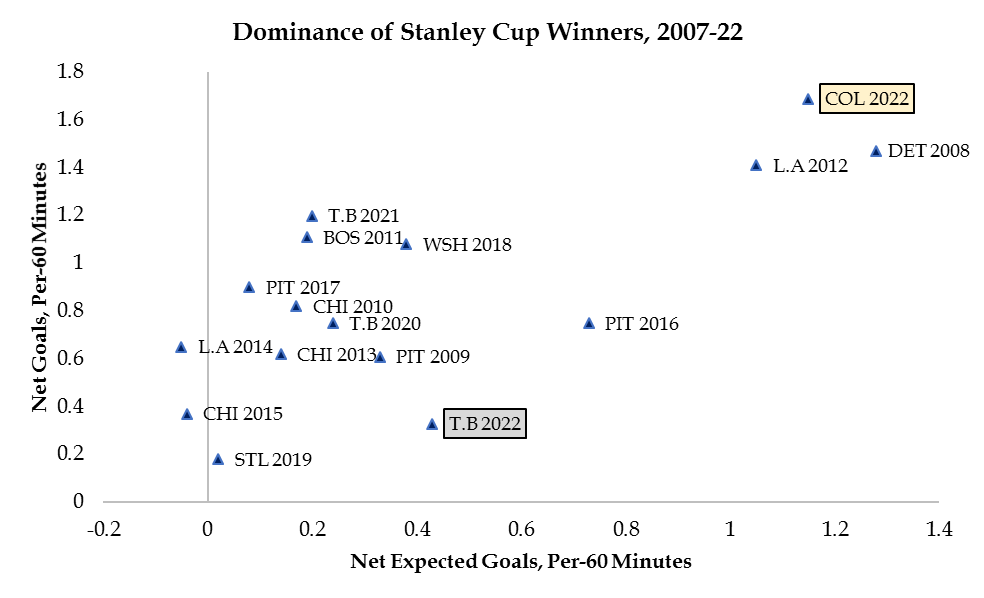 The average Stanley Cup winner has been about 0.75 goals better than their opponents over 60 minutes of play, or, said another way, ends the postseason with a +18 goal differential. Expected goals are more muted, but that’s sort of the trick of finding success in the playoffs – you need territorial dominance and either a considerable goaltending advantage, a team that’s converting on a large percentage of their scoring chances, or a combination of the two for a six-week stretch.

From time to time you get performances that move towards the extremes. The St. Louis Blues, as one example, won the Stanley Cup in 2018-19 by outscoring their opponents 75-70 (+5). The team they beat in the Final, the Boston Bruins, outscored their opponents 79-51 (+28) over the course of the playoffs. St. Louis was fantastic that year, but they weren’t a dominant team in the postseason – rather, one who won a lot by the thinnest of margins.

The other side of the spectrum has three teams, and more specifically, two comparables to this year’s Avalanche this year.

Sutter’s Los Angeles team in 2011-12 was perhaps the apex of possession-dominant hockey – those Kings combated limited shooting talent in their lineup with the most oppressive 200-foot brand of hockey we have seen, forechecking and backchecking like madmen, and pressuring opponents into frequent miscues. (They also had an all-time great goaltending performance by way of Jonathan Quick.)

The 2007-08 Detroit Red Wings were similarly puck-dominant, but the amount of puck-on-stick time was extraordinarily different. Sutter’s team wanted to chase the puck and force you to make the mistakes; Babcock’s team wanted to leverage gifted playmakers like Pavel Datsyuk, Nicklas Lidstrom, and Henrik Zetterberg to pick the opposition’s defensive structure apart.

In some ways, that Detroit team is the closest thing we have seen to this Colorado squad. Nathan MacKinnon is certainly on the short list of the league’s most dangerous attackers, a list that a player like Datsyuk topped for many years. Lidstrom, considered one of the greatest defenders of all-time, has only had one modern-era comparable in Ottawa’s Erik Karlsson (2016-17). It’s fair to wonder if 23-year-old Colorado blueliner Cale Makar is starting to follow suit.

But even that team did not carry the goal differential this year’s Colorado team has. This Avalanche team is going through a dynastic franchise in Tampa Bay that, just one season ago, put together one of the more impressive playoff runs we have seen.

The Avs are 60 minutes from a bunch of names being engraved on the Stanley Cup, yes. But they are also 60 minutes away from perhaps finishing the season as the most dominant team we have seen during this era, and that is saying something.