Are the Oilers in trouble without Nurse?

To say I‘m a believer in the Edmonton Oilers under Jay Woodcroft would be an understatement.

Since the coaching change, Edmonton has played with more pace throughout the lineup, unlocking a high-flying offence buoyed by top-end skill that dwarfs what almost every other team around the National Hockey League has in stow.

What, then, should we make of the Oilers in the first round of the Stanley Cup Playoffs? After losing Game 5 in overtime, the Oilers are on the brink, one loss from elimination at the hands of a Los Angeles Kings team that finished 17th in goal differential (+3) this season. Considering the underlying organizational expectations and the Oilers having 70 per cent implied odds to win the series at the start, a loss would be catastrophic.

The Oilers still have time to salvage things, but it will require (among other things) a road win at the Staples Center Thursday night in Game 6. Ahead of that pivotal game we ask: What is breaking down for the Oilers, and what can we expect from the Kings as they work to close out this series?

When the Oilers brought Woodcroft up, the key change that rocketed the team up the standings was an unrelenting offence that could score at will. Their effectiveness has very much carried itself into the postseason. Defensively, however, the Oilers have been a mess, particularly true at even strength: 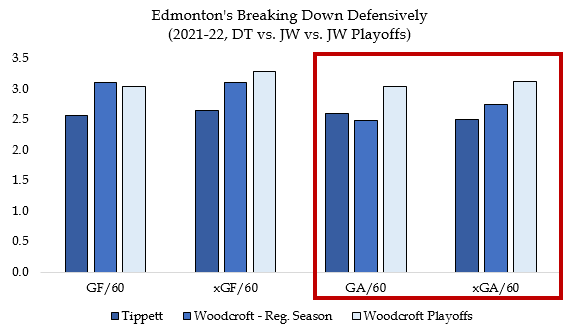 That is an ugly move to the upside for two key defensive measures, and the scary part is the Oilers have had decent goaltending in the series. Mike Smith has had a couple of gaffes, but he’s also stopped 93.0 per cent of shots faced over the course of five games. Regardless of how you feel about the veteran, he isn’t the primary reason the Oilers are losing this series.

No, the primary reason is that Los Angeles’ offensive style – heaps of shots, many of which are low-percentage shots, and maintaining the offensive zone at all costs – has beleaguered an Oilers team that’s much more confident on the rush.

If you look at a shot profile for the Kings from the regular season, you can see how this style spirals its way into the interior when effective. The Kings hunt rebounds and look for defensive miscues to offset a lack of high-end shooting talent within the roster, and they are good at it (via HockeyViz): 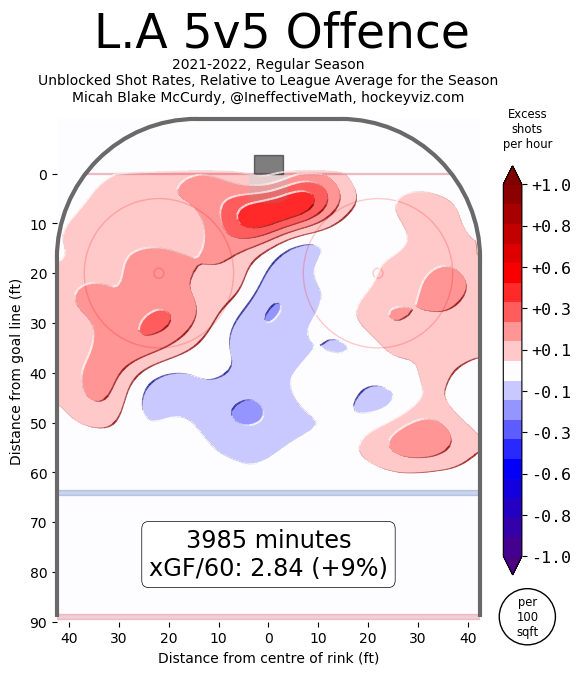 How are the Kings taking the game to the Oilers? If we look at the usage differences between the Kings and the Oilers, we see divergence in strategy. The Kings are more comfortable playing their bottom-six forwards, while the Oilers are looking for every opportunity to play the Connor McDavid or Leon Draisaitl lines.

The McDavid line, generally featuring Evander Kane and Jesse Puljujarvi this series (though Woodcroft did blender the lines a bit in Game 5), has had plenty of success against the Kings. The problem, as it has tended to be over the years, is in those non-McDavid minutes. Edmonton is outscoring Los Angeles 7-4 with McDavid on the ice (7-3 expected); with him resting, the Oilers have been outscored 9-5 (9-6 expected).

This data reaffirms what we are seeing on the ice. Los Angeles is simply trying (and perhaps failing to some degree) to survive the minutes with McDavid on the ice. In every minute he is not, Los Angeles peppers Edmonton goaltenders and tries to pressure Edmonton’s attackers by forcing them to play lengthy stretches in their own zone. And of note, many of these minutes involve the Duncan Keith pairing on the ice for the Oilers, which has had a miserable time defending the run of play this series.

The Oilers are still very much alive in this series. There’s too much talent across the lineup, and considering the goaltending they are getting, it’s hard to believe they are even facing elimination. But there is no longer any margin for error. If there was ever a time to see the depth on this roster buck up and play sound two-way hockey, this is it.

If they don’t, the Kings will have a great opportunity to skate the Oilers out of the first round.