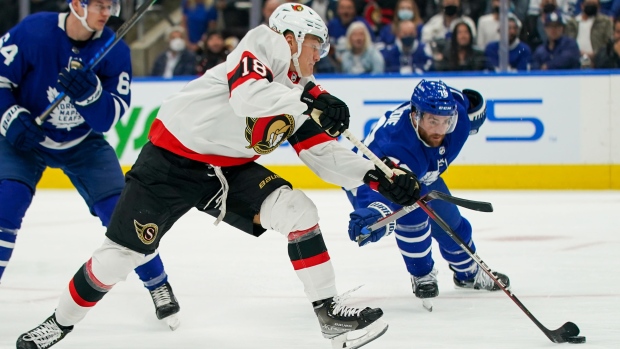 Senators winger Tim Stützle is just 19 years old. If the NHL’s opening weekend is any indication, he’s already a problem for the rest of the Atlantic Division.

Ottawa’s third-overall pick from the 2020 draft is coming off an impressive rookie season, one in which he managed 29 points (12 goals and 17 assists) in 53 games. Transitioning to the highest professional level of competition is difficult for anyone; it is doubly so on a rebuilding team that finished in sixth place in the North Division.

A year later, hope springs eternal in Ottawa. There are still tremendous questions about a ragtag blueline, and the Matt Murray/Anton Forsberg/Filip Gustavsson goaltending carousel hasn’t exactly sorted itself out, but there is little denying how much young talent is already filling out this lineup. And in their opening three games, no player has looked more poised to make a considerable jump than Stützle.

The highlight-reel plays have been all over the ice, and head coach D.J. Smith hasn’t been shy with his ice time either. It’s very early, but Stützle is the most utilized player of a very short list of teenage players who have earned an NHL roster spot this season – an accomplishment in and of itself at his age: 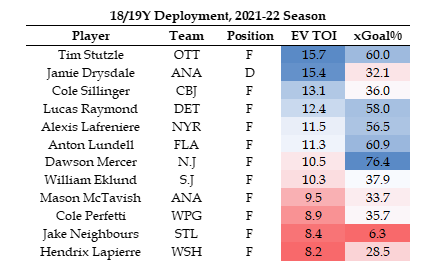 Stützle has played primarily with fellow winger Drake Batherson to start the season, centred by Josh Norris. It’s the most raw talent you are going to find on a line in Ottawa, and both Norris and Batherson are well on their way to establishing themselves as top-six options in their own right.

But the playmaking from this line is, by and large, coming from the stick of Stützle on the wing. Smith and the rest of the Senators’ coaching staff want to see this line blossom into something explosive by the end of the year, but I also think you will see Ottawa continue to show interest in adding at the centre position. If Stützle is what Ottawa thinks he is, pairing him with a dynamic passer makes all the sense in the world.

The good news is this young line is already showing they’ll be tough to handle for opposing defences around the league. Look at the splits the Stützle line posted through the first three games of the season: 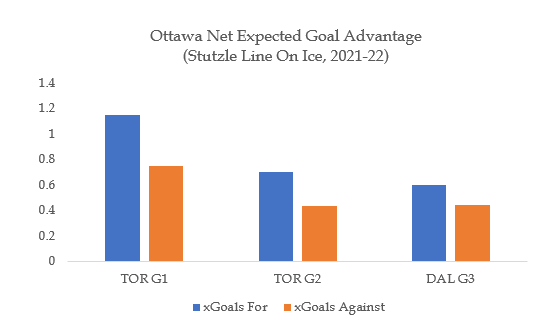 For the majority of the rebuilding years in Ottawa, the Senators spent most shifts in the defensive zone, unable to breakout against superior opposition and prone to defensive zone turnovers – the type of sloppy play that creates territorial disadvantages and negative goal differentials.

Ottawa still has those problems in spots, but the top part of their lineup is starting to change that narrative.

The Stützle line has looked superior to the opposition in three consecutive games, and that’s no small feat considering the competition he faced. Stützle’s most common defensive matchup over those three games included:

Teams are already starting to show Stützle (and the Ottawa Young Guns line) some respect, dressing strong defensive competition against the trio. If nothing else, it makes the run-of-play dominance that much more impressive.

This is one player you do not want to take your eyes off this season. Stützle and his line look ready to explode.