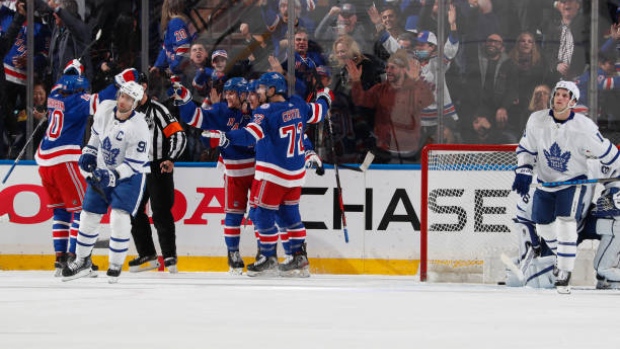 The Florida Panthers and Toronto Maple Leafs engaged in perhaps the most entertaining game of the National Hockey League season on Tuesday night. After the Maple Leafs jumped out to a four-goal lead, the Panthers were able to erase it and then some, prevailing 7-6 in overtime.

The offences were incredible, the pace frenetic, and the entertainment value at maximum. Considering we were watching two of the better teams in the NHL, it was hard to see much beyond two great teams challenging one another for 60-plus minutes. And yet, it goes without saying: The Maple Leafs blew another multi-goal lead in a big spot, which has become something of a calling card for this franchise in recent years.

In January, I wrote why I thought this Maple Leafs team is not the same playoff-pretender of years past – they remain an offensively dominant team, but the blueline is much more reliable than in years past.  Although the goaltending has been shaky at best, the return of a healthy Jack Campbell is surely a relief for head coach Sheldon Keefe and the rest of the organization. Yes, the Eastern Conference is as ferocious as it’s been in recent history. But so too are the Maple Leafs.

Of course, little of this will matter until this team does it when it matters. The core has been together for years now and the team has talked about titles, but we still haven’t seen a single playoff series victory. For as long as that’s the case, caution – and criticism – will reign supreme.

But I do think Toronto’s collapse against Florida is interesting, if only because it’s not something we have seen much of this year. In previous regular seasons, the Maple Leafs – despite generally being a favourite in most games – were notorious for blowing leads. Even against non-playoff-calibre opponents.

Consider the last four seasons of Toronto playing in game states where they were leading or locked even with their opponent and compare it to what we have observed this season. I have split the numbers by both score differential and road versus home.

Let’s look at road results first, where leading teams tend to be more vulnerable. (It goes without saying, but there is no time component in these graphs – leading teams don’t necessarily need to score so long as the other team doesn’t score.) 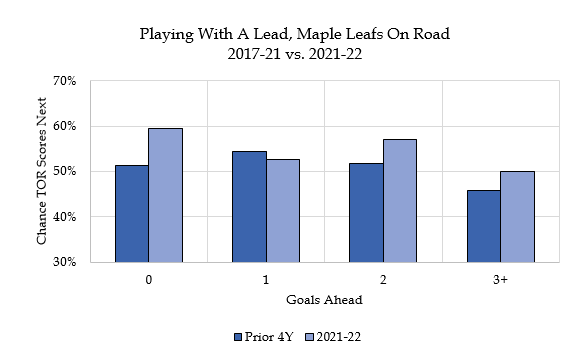 In prior seasons, the Maple Leafs were effectively a coin-flip at scoring the next goal when holding the lead. That’s in line with a good portion of teams around the league, but it also illustrates what I’d consider tail risk: If you aren’t consistently creating an advantage, you are always going to be vulnerable to a few puck bounces in succession going against you. And though Toronto’s most famous blowups have come in the playoffs, the reality is they were a very average team at protecting leads on the road in the regular season.

This season, it’s quite different. The Maple Leafs are rolling over their opponents even when playing with a lead, which is indicative of a team that’s more effective at combating score effects and conservative play, and generally the calling card of a Stanley Cup contender. In score-tied situations, they’re scoring the go-ahead goal nearly 60 per cent of the time. And that’s on the road.

Let’s flip it to home ice: 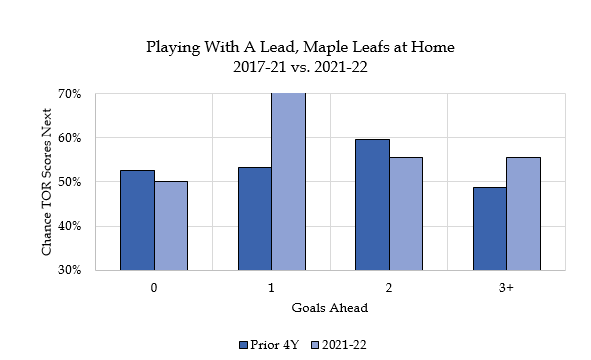 Toronto was much better building and protecting leads on home ice in years past, so the delta between 2017-21 and the 2021-22 season is somewhat muted. But I think it reinforces the same point: Toronto, when in score-tied or score-lead situations at home, is generally going to keep pushing their opponents over the proverbial cliff. And yes, that percentage with a one-goal lead is correct – the Maple Leafs are getting the next goal nearly 70 per cent of the time there, which is a remarkable number.

Until Toronto does this against superior opponents in April and May, these gains won’t feel meaningful. But when we talk about Toronto becoming a credible threat in the East, it’s because we are seeing material changes in performance in spots where they have historically struggled.