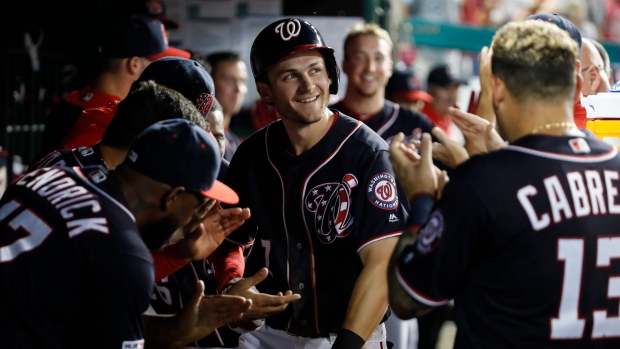 Washington Nationals closer Sean Doolittle added to his career high by getting his 27th save Monday night — and there are more than 1 1/2 months still to go in the season.

He's already easily eclipsed his total for number of games finished in a year, too.

After pitching for the fifth time in seven games and hanging on to save Washington's 7-6 victory over the Cincinnati Reds, Doolittle acknowledged what seems rather obvious, even if he was throwing in the mid-90s mph: The lefty is tired.

"I'm starting to feel it a little bit," said Doolittle, who has struggled lately and blown five of his 32 save chances this year. "These are the nights where you've got to dig deep and grind it out."

Trea Turner and Matt Adams homered, Erick Fedde threw well after allowing a solo shot on the game's first pitch and the depleted Nationals made a 7-2 lead stand up. But barely.

After former Reds reliever Tanner Rainey allowed a two-run homer to Cincinnati rookie sensation Aristides Aquino — it was the record eighth round-tripper in his first 12 major league games for the NL Player of the Week — Doolittle came in for the ninth with a 7-4 lead.

"That ball was crushed," Doolittle said. "It was supposed to be in — and it was middle. And it was a really loud sound."

The next batter singled, then came around on Joey Votto's two-out double off the wall in left on a nine-pitch at-bat. After an intentional walk, Doolittle ended things on Josh VanMeter's foul popout.

Doolittle was asked whether he needs a reduction in his workload or just must handle what's asked of him by manager Dave Martinez, who said relievers Wander Suero, Hunter Strickland and Daniel Hudson were unavailable.

Doolittle said he has to figure out "how to deal with it."

"It's mid-August. Everybody's gassed. It's a marathon, for sure. The good teams find a way — the good players find a way — to catch that second wind. You really want to be playing your best baseball in September and peaking at the right time. There's still every opportunity to do that," he said. "I've hit a couple of speed bumps here, recently. It hasn't been as smooth as I wanted it to be."

Coming off a 5-4 trip that left them tied for the lead in the NL wild-card race, the Nationals opened a six-game homestand without three-time Cy Young Award winner Max Scherzer, left fielder Juan Soto or first baseman Ryan Zimmerman — all injured — while second baseman Brian Dozier was ill and limited to pinch-hitting duty.

And Washington quickly trailed, because Jesse Winker drove a sinker from Fedde (3-2) to left for his 16th homer — and third leading off a game this season.

Votto then walked and took second on a groundout. But when VanMeter singled up the middle, Votto headed home and easily was thrown out by centre fielder Victor Robles, who picked up his eighth assist of 2019.

"Probably the biggest play of the night," Fedde called it.

Adams, starting in place of Zimmerman, hit a two-run shot, his 18th homer, to straightaway centre, and Turner connected for a three-run homer in the fourth, his 11th — both off Anthony DeSclafani (7-7).

Reds LHP Amir Garrett started serving his eight-game suspension for charging from the mound toward the Pittsburgh Pirates' dugout during a game July 30.

A pregame moment of silence was observed in memory of former Associated Press sports writer Joseph White and Washington Times sports intern Katelyn Davis, both of whom died over the weekend.

Reds: C Curt Casali (right knee) had his rehab assignment put on hold because of a sore left hamstring.