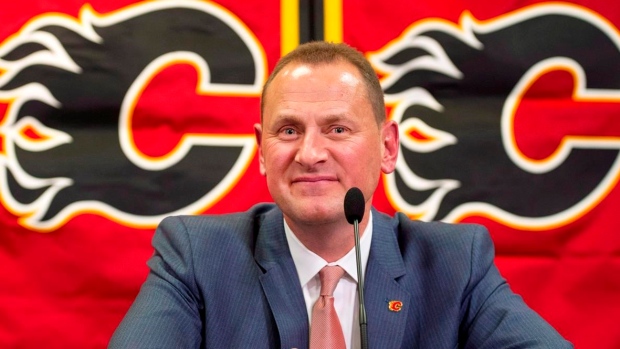 “As far as what the future holds, we’re not in a position to talk about that yet other than he’s on IR and we’ll continue to work through this and he’ll continue to look to try to get healthy as quickly as he possibly can,” Treliving said.

“We knew coming in, hey listen, Jaromir is one of the all-time greats in our sport. I think he’s shown flashes since he’s been here. If you couple it with the fact that he was unable to participate in training camp, he’s battled some nagging stuff and at the end of the day the age that he is at, that’s difficult to go through those things at 20, never mind at 45 or 46 years old.”

The Flames placed Jagr on injured reserve with a lower-body injury Sunday. The move is retroactive to Dec. 31, which was the last time he played.

TSN Hockey Insider Darren Dreger said on last week's edition of Insider Trading that any decision on his future will be put on hold until he is healthy.

"Most believe that he is done in Calgary, but his injury is still significant and there’s a collection of them," Dreger said.

"He’s being treated in Calgary but he first wants to get healthy and then determine what his playing future is. Now, Calgary can try and trade him but it doesn’t sound like there’s much of a market out there. Perhaps he returns to Europe, but he first wants to get healthy before there is any decision that's being finalized and that might take some time."

The 45-year-old has played 22 games with the Flames this season, scoring one goal and six assists. He signed a one-year, $1 million deal in the off-season to continue his career that started all the way back in 1990 with the Pittsburgh Penguins.

As for head coach Glen Gulutzan's stick toss at practice earlier this month, Treliving said it didn't bother him at all.

"I thought at that particular time we were a bit loose in our practice and then we were excellent for the last 30 minutes of that practice. It snapped us into shape here a little bit,” he said.

The Flames have won five in a row since then, en route to a seven-game winning streak.

The Flames (25-16-4) sit second in the Pacific Division behind the Vegas Golden Knights. They will be back in action Sunday against the Winnipeg Jets.