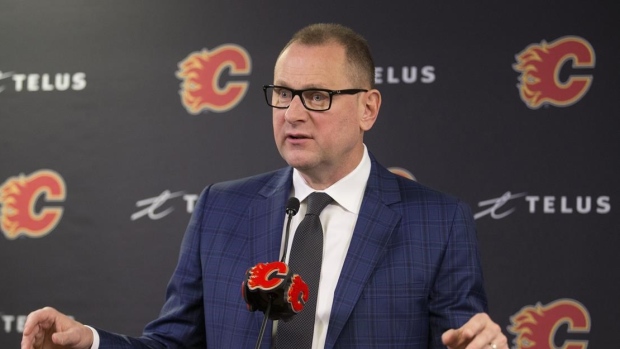 Buckle up, hockey fans, the next two weeks could bring lots of news - and not just on the NHL’s Return to Play plans for 2020-21.

According to Calgary Flames general manager Brad Treliving, discussions about player movement are starting to heat up as teams prepare for a 56-game season with a Jan. 13 start.

“Conversations over the last week or so have picked up,” Treliving said in an interview with TSN on Tuesday.

“You may see some trade activity that takes place. I certainly think there will be player movement between now and the start of the season and in a lot of ways I think it’ll be normal course. Teams are always looking at ways that they think they can improve themselves.”

According to CapFriendly, 10 of the NHL’s 31 teams are above the salary cap right now, including the Stanley Cup champion Tampa Bay Lightning. The Flames have $223,334 in available space. Despite a free-agent market that still includes the likes of 30-goal scorer Mike Hoffman, speedy winger Andreas Athanasiou, and a plethora of depth options at all positions, Treliving said it’s likely that the Flames roster as currently composed will be the one that leads them into the start of the upcoming season.

“Barring anything dramatic, this is probably the roster that we’re going to go to camp with,” he said. “We’re excited to see our team in a camp environment, get the guys on the ice and competing against each other and just see how things look and go from there. But we continue to have discussions and see if there are opportunities for us, but as we sit here today…less than two weeks out from training camp, I anticipate that our roster as currently constructed is probably what we’ll get into camp with and go from there.”

Just where the Flames play regular season games remains to be seen. TSN’s Frank Seravalli has reported about the continuing negotiations between the NHL and NHLPA and the five Canadian provinces (B.C., Alberta, Manitoba, Ontario and Quebec) that would host games. Canada's seven NHL teams are awaiting provincial health officials to sign off on league COVID-19 protocols for the new season with the country's border still closed to non-essential travel.

"I’ve been having conversations with my colleagues across the country, as this isn’t just an Alberta decision,” Alberta’s chief medical officer Dr. Deena Hinshaw said at her daily press conference on Monday.

“The decision involves all the locations that have NHL teams. And so the critical piece is that we’re able to find a path forward that ensures that public health is protected. That’s the work that we’re in right now.​"

While the NHL has yet to confirm where Canadian teams in its newly created North Division will play, Treliving said he’s confident that Flames games will take place in Alberta in the new year.

“We’re anticipating that there won’t be any issues as we get through the training camp stage and into the regular season stage,” he said.

Count Treliving as a fan of that anticipated all-Canadian temporary realignment that would see the Flames play each Canadian time at least nine times.

“I’m just looking forward to the division as a whole. There’s excitement, there’s energy when you have Canadian teams. Any time you have teams like Montreal, Toronto, Original Six teams, there’s just a different feel, there’s a different excitement. To me, to be able to have those games throughout the year, I think is going to make it really exciting.