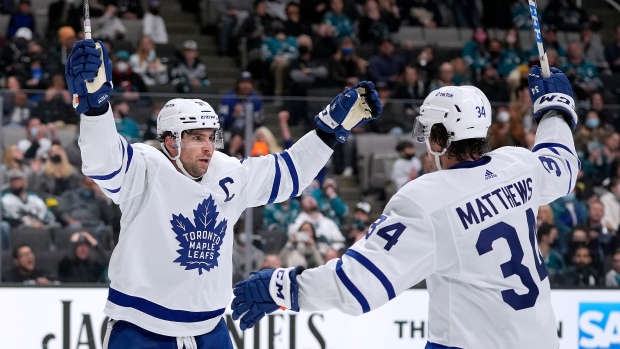 TSN Toronto Reporter Mark Masters reports on the Maple Leafs, who practised at Ford Performance Centre on Monday ahead of Wednesday’s game against the Anaheim Ducks.

The Leafs finally have a fully healthy forward group and Sheldon Keefe is taking advantage of the rare opportunity to experiment with a more balanced approach. At practice, Auston Matthews, Mitch Marner and William Nylander all skated on different lines.

"It is something I have been wanting to get a look at for quite some time now," the coach explained. "Really, dating all the way back to training camp. It is about having Matthews, Marner, and Nylander on three separate lines and getting a look at what that looks like for both our team and how the opposition might look to contend with it."

Matthews skated between Michael Bunting and Ondrej Kase on Monday while Marner joined John Tavares and Ilya Mikheyev on the second line. That left Nylander with checking-line centre David Kampf and usual running mate Alex Kerfoot on the third line.

"Willy has great chemistry with Kerfoot so we wanted to maintain that," Keefe said. "With Kampf's involvement on that line, it gives us great defensive utility, but also Kampf has been great forechecking and getting up the ice and helping with that."

Those trios will remain together at Tuesday's practice before Keefe makes a final decision about whether to implement the spread-offence strategy on Wednesday against the Anaheim Ducks.

Keefe promised Nylander, who is experiencing a career year with 38 points in 38 games, that the revised alignment won't result in a lesser role.

"He just said that he wanted to see a new look and it's his job to keep the minutes the same," Nylander revealed. "So, that's basically all he said."

"There is no demotion here for anybody," Keefe stressed. "I think this is about spreading out our lineup. It is something we haven't really done in my time here very much. I want to see what it does to our team with the additions that we have made in the off-season and the guys who are really comfortable on our roster."

Keefe pointed out that he can experiment with different combinations within the framework of these new lines during games.

"It gives me some flexibility to look at it getting Matthews and Tavares some extra shifts in there or maybe moving Nylander to centre at different times," he said.

Nylander acknowledged that the last few games have been "up and down" for him and usual linemate Tavares.

The Leafs captain was harsher in his self-assessment.

"From a personal standpoint, I know I can be a lot better with my game and helping out my linemates and doing a better job," Tavares said. "So, I take that onus and responsibility to go out and execute at a higher level and more consistently."

Tavares has just one goal and one assist over the last six games.

"John has still played well for us and still made plays," Keefe noted. "But we think he has another level to get to."

"We have seen some of that for sure," Keefe agreed. "I have had similar conversations with Jason Spezza. He feels that not playing a lot of games has been a challenge. Even [Jake] Muzzin coming out of the break felt pretty similar ... The schedule is going to heat up. Guys will be in the rhythm that they're accustomed to. It is just a matter of finding their way right now. We will see how it all plays out. Even something as simple as changing the lines and changing the chemistry in and of itself is stimulating and [could] get those guys firing again."

Tavares certainly doesn't mind being reunited with Marner, who has scored in all three games since returning from the COVID protocol.

"He's one of the smartest players in the game," Tavares said. "His ability to read the play and manipulate the opponent is as good as any winger in the game. He has an ability to visualize and see it happen before it happens so, as a linemate, you're just trying to get open knowing he's got eyes everywhere."

Monday marked Kase's first full team skate since entering COVID protocol on Jan. 14 in Arizona. He rejoined the Leafs in New York over the weekend and took part in an optional skate on Saturday.

"It was long," he said of the process. "It was really long. It was 10 days and I skated once with the team in New York. It's nice to be back in Toronto and with the guys."

And nice to be back with Matthews and Bunting with whom he was playing with before testing positive.

"I feel like we have so many chances the last two games we played," Kase said. "We had so much offensive-zone time. We scored once only against Arizona, but we had three, four great chances so I think we could have scored a little more."

It's no coincidence that Keefe wanted to wait until Kase returned to try out this new line alignment.

"We have some confidence in Kase's ability to play with Matthews and Bunting," Keefe said. "Right away, it gives us the ability to say, 'We think that works well for us so what can we do underneath that?' It gives me more confidence in going with something [new]."

After missing two games with a concussion, Muzzin returned to practice on Monday. The defenceman skated in a red no-contact sweater and departed halfway through the workout.

"He is feeling better," Keefe confirmed. "His involvement in today’s practice — at least the first half of it — is a good indication of his progress. Any time you are recovering from an injury like this you have boxes to check along the way. Today's practice was one of those boxes to get him back going again."

Any chance he plays on Wednesday against the Ducks?

"I haven't gotten an update in terms of how he felt after practice," said Keefe. "Given the process that players coming back go through I would say Wednesday is probably a stretch for him at this point."

The Leafs only other game this week is Saturday in Detroit.

Like Kase, Justin Holl took part in his first full practice since exiting COVID protocol. He was back on the second defence pair skating alongside Rasmus Sandin.

Timothy Liljegren dropped to the third pair with Travis Dermott.

Nylander made an eyebrow-raising footwear choice last week when Toronto was hit by a blizzard.

"Slippers," the Swede said with a smile. "I live in a condo. I just go right down to the car and I don't really deal with the snow. I didn't think about that when I got to the rink."

Sandin posted a video of Nylander, his good friend and countryman, trudging to his car after practice.