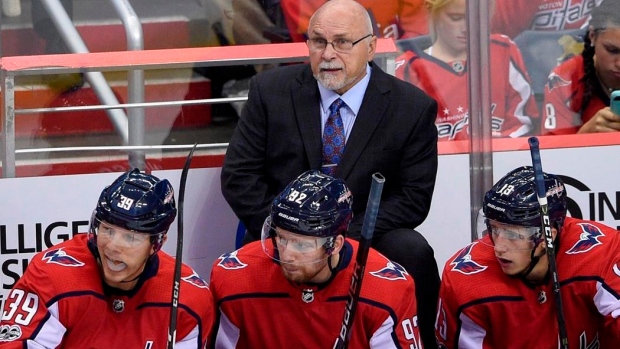 Barry Trotz resigned from his position, the club announced on Monday.

"We are obviously disappointed by Barry's decision, but would like to thank Barry for all his efforts the past four years and for helping bring the Stanley Cup to Washington," the club said in a statement. "Barry is a man of high character and integrity and we are grateful for his leadership and for all that he has done for our franchise."

Trotz released a statement of his own later on Monday.

"When I came to Washington four years ago we had one goal in mind and that was to bring the Stanley Cup to the nation’s capital," Trotz said in the statement. "We had an incredible run this season culminating with our players and staff achieving our goal and sharing the excitement with our fans.  I would like to thank Mr. Leonsis, Dick Patrick and Brian MacLellan for giving me the opportunity to be a part of this great organization.  I would also like to thank our players and staff who worked tirelessly every day to achieve our success."

TSN Hockey Insider Pierre LeBrun notes that Trotz had a clause in his contract where a Stanley Cup victory triggered  a two-year extension with the Capitals that came with a $300,000 raise. Even taking into account the raise, Trotz would be set to make $1.8 million, which would not be commensurate to Trotz's experience in regards to 2018 coaching salaries and Trotz had to step down if he didn't agree to those terms.

Point of clarification on the Trotz contract: as per the clause in his contract, winning the Stanley Cup automatically triggered the two-year extension with the modest raise so really, he had no choice but to step down unless he was happy with that extension and terms.

A native of Dauphin, Man., the 55-year-old is the fifth-winningest coach in NHL history with 762 victories, trailing only Scotty Bowman, Joel Quenneville, Ken Hitchcock and Al Arbour.

Prior to his four seasons with the Caps, Trotz spent 15 seasons behind the bench with the Nashville Predators.

With the Caps, Trotz won the Presidents' Trophy as the league's best regular-season team on two occasions in 2016 and 2017 and Trotz was the recipient of the Jack Adams Trophy as the NHL's top coach in 2016.

Over his four seasons behind the bench in D.C., the Capitals won 205 regular-season games, the most of any team during that stretch.

Outside of the Capitals, the only other current coaching vacancy in the NHL is the New York Islanders.

Trotz becomes the first head coach to resign after a Stanley Cup since Bowman ended his coaching career with the Red Wings in 2002.