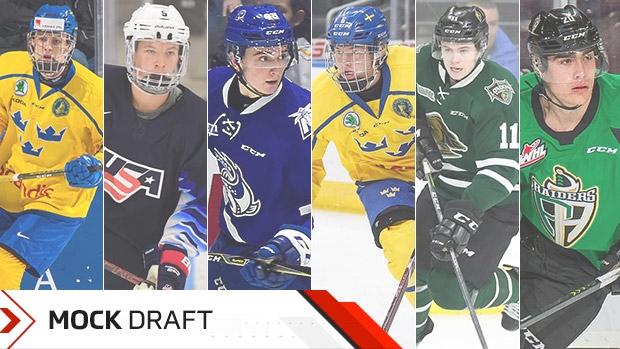 The Jacob Trouba trade has added some more Canadian content to the first round and USNTDP centre Alex Turcotte is on the rise in TSN Director of Scouting Craig Button’s mock draft 5.0 ahead of this weekend’s NHL Entry Draft in Vancouver.

But Button now has Illinois native Turcotte forcing his way up the board, going to the Chicago Blackhawks at No. 3.

“The Blackhawks have used their last three first-round picks on defenceman,” Button explained. “It’s time to add to their forward group. Why not take the local kid, who plays like a lower-case Jonathan Toews, and let him learn from the captain?”

Saskatoon Blades centre Kirby Dach is the first Canadian skater off the board, heading to the Colorado Avalanche at pick No. 4. Dach, who had 73 points in 62 games this season, is a playmaking pivot credited with having one of highest hockey IQs in the draft class.

“I love the idea of Dach eventually slotting in on the second line behind Nathan MacKinnon,” Button said. “That sets up a great one-two punch down the middle for the Avs going forward.”

The rise of Turcotte pushes Vancouver Giants defenceman Bowen Byram, who led all Canadian Hockey League blueliners in goals during the regular season and the Western Hockey League playoffs in scoring, down to the Los Angeles Kings at No. 5.

“The Kings land a potential No. 1 defenceman at this spot in the draft,” Button said. “Byram is that good a player. It would be a huge win for the franchise. I think Drew Doughty would be very happy with the pick.”

Elsewhere in the Top 10, 5-foot-7 sniper Cole Caufield, who scored 72 goals in 64 games for the USNTDP, lands in Buffalo with the seventh pick.

“Caufield is the best goal-scorer available in this draft,” Button said. “I compare him to 5-foot-7 soccer superstar Lionel Messi.”

The Oilers will be the first Canadian team to step to the podium Friday night and Button sees Swedish defenceman Philip Broberg as a fit with the eighth pick.

“Broberg is an elite skating defenceman like Jay Bouwmeester,” Button said. “I like adding that skill to the group of blueliners they’ve drafted in recent years.”

The Vancouver Canucks are up at No. 10, picking USNTDP left wing Matthew Boldy. The 6-foot-1, 192-pound Boldy is a blend of power and skill.

“Boldy reminds me a lot of Mikko Rantanen,” Button said. “I think his skills will be a nice addition to a good group of young forwards already playing in Vancouver.”

Button has the Montreal Canadiens bolstering their blueline depth by taking Mississauga Steelheads defenceman Thomas Harley at No. 15.

“I like to say that Harley has an offensive boldness to his game,” Button said. “He impacts the game in a significant way when he’s in the offensive zone. He has the potential to be another Thomas Chabot.”

The Ottawa Senators have the No. 19 pick as part of the Matt Duchene trade with Columbus, where Button sees Swedish defenceman Victor Soderstrom as a fit.

“Soderstrom is a finesse defenceman with a lot of potential,” Button said. “Adding his skill to a group that includes Erik Brannstrom, Jacob Bernard-Docker and Thomas Chabot gives you a real shot at building a solid top four on the blueline.”

The Winnipeg Jets got back into the first round on Monday night by re-acquiring the No. 20 pick from the New York Rangers as part of the Trouba trade. Button sees the Jets using the pick on versatile London Knights forward Connor McMichael.

“Kevin Cheveldayoff has traded for depth at centre the last two trade deadlines,” Button said. “That’s why I like McMichael in this spot. Winnipeg needs a skilled centre. He’s consistent and has the ability to skate, score and contribute at multiple forward spots.”

The Calgary Flames have the 26th pick, where Button has them taking 20-year-old Prince Albert Raiders right wing Brett Leason.

The 6-foot-3, 200-pound overage forward was passed over in consecutive NHL drafts, but he broke out with 89 points in the Western Hockey League this season and earned a spot on Canada’s World Junior team.

“I know he’s gone through two drafts, but his evolution as a player is impressive,” Button said. “I like the idea of eventually adding his size alongside Matthew Tkachuk and Mikael Backlund on the second line in Calgary.”

RANGERS: No. 2 is highest pick in franchise history: A Finn will get selected 2nd or 3rd overall for fourth straight year.

BLACKHAWKS:  Chicago has picked defencemen with three of three first round picks the last two drafts.

THE SKINNY: 6-foot-4 student of the game credited with one of highest hockey IQs in draft.

AVALANCHE: Colorado lost lottery for second time in three years, dropping from 1st to 4th in 2017 and 2019.

THE SKINNY: Led CHL defencemen with 26 goals and the WHL playoffs in scoring with 26 points.

KINGS: Los Angeles chose centres with their four first and second-round picks in 2017 and 2018.

RED WINGS: Will Detroit take pure playmaker Zegras at No. 6 to go along with 2018 No. 6 pure goal-scorer Zadina?

SABRES: None of Botterill’s 12 picks during two years as Sabres’ GM have come from the CHL.

OILERS: This is the 10th time in 11 years the Oilers are selecting in the top 10.

DUCKS: Anaheim has chosen a CHLer or Swede with their first pick 10 straight years.

THE SKINNY: Earned MVP honours at All-American Prospects Game with two goals and an assist.

THE SKINNY: German Elite League rookie of year played most of season as 17-year-old.

PHILADELPHIA: Philadelphia did not draft a Canadian in 2018 – marking a first in franchise history.

WILD: Minnesota has selected just one Canadian with its first pick the past 10 drafts.

THE SKINNY: Could become highest-drafted goalie since Jack Campbell (No. 11) in 2010.

PANTHERS: Florida has missed the playoffs an NHL all-time worst 16 of 18 seasons.

COYOTES: Arizona hasn’t picked a player from a European team in the first round since 2009.

THE SKINNY: His 58 points represent second most among first-time draft-eligible defencemen.

CANADIENS: No team was busier in the 2018 draft – Montreal made 11 picks and five trades.

THE SKINNY: Scored eight goals – three more than anyone else - at 2018 Hlinka Gretzky Cup.

THE SKINNY: Voted one of best skaters and most improved players in OHL Coaches Poll.

STARS: Dallas has picked exactly one defenceman in each of last three drafts.

THE SKINNY: The only U-18 player to have regular role in Swedish League this season.

SENATORS: Ottawa is one of four teams with three picks in the top 44.

THE SKINNY: Longest pointless streak of season with London was just two games.

THE SKINNY: The 199-pounder scored a Quebec League playoff-high 20 goals in 23 games.

KINGS: Los Angeles last had two first-round picks in 2008. It chose Doughty with the first of them.

THE SKINNY: Collected eight goals and 14 points in 10 playoff games.

ISLANDERS: Isles have selected six players from the USNTDP over the past three drafts – including three in 2018.

THE SKINNY: 2017 OHL No. 1 pick tied for Hlinka Gretzky Cup lead in assists with seven in five games.

NASHVILLE: Nashville has chosen players from seven different countries with their top pick in the past seven drafts.

THE SKINNY: USHL forward of the year averaged league-high 1.58 points per game.

CAPITALS: The Caps chose defencemen with their top two picks in 2018 and top three picks in 2017.

THE SKINNY: The 20-year-old with 89 points in 55 games ranks as oldest elite prospect in draft.

FLAMES: The Flames have made 10 picks over the past two drafts – nine forwards, one defenceman and zero goalies.

THE SKINNY: Contributed eight points in seven games for Canada at World U-18 championship.

LIGHTNING: The Lightning has selected players from the CHL with their top picks nine straight years.

THE SKINNY: WHL Rookie of the Year led all CHL first year players with points (81).

HURRICANES: Owner Tom Dundon says his team will not draft defencemen in the first round as long as he is owner.

DUCKS: Anaheim has drafted just two defencemen in the last three drafts, neither higher than No. 85.

THE SKINNY: Earned one of Central Scouting’s highest grades for skating – 9.0 out of 10.0.

SABRES: Buffalo chose defencemen with five of their six picks in 2018.