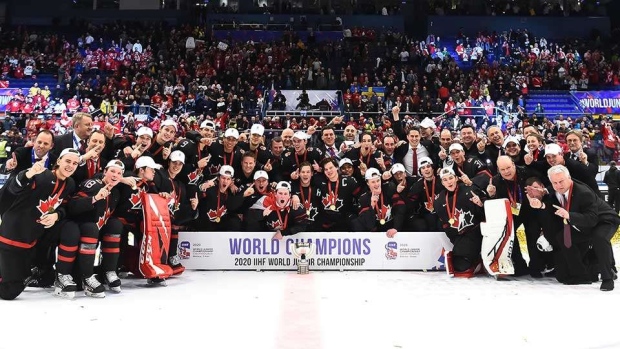 TSN, RDS, and Hockey Canada today announced a long-term media rights agreement that extends through the 2033-34 season, continuing their long-standing partnership that dates back to 1991. The announcement comes on the heels of TSN and RDS’s exclusive live broadcast of Team Canada’s instant-classic gold medal win over Team Russia on Sunday at the 2020 IIHF WORLD JUNIOR CHAMPIONSHIP, live from Ostrava, Czech Republic.

The extension ensures that TSN and RDS will continue to hold the exclusive, multi-platform media rights to Hockey Canada events, including the IIHF WORLD JUNIOR CHAMPIONSHIP, which has become both Canada’s favourite hockey holiday tradition and one of the networks’ most-watched properties. World Juniors games make up three of the top five most-watched programs ever on TSN, and nine of the Top 20.

“For 30 years, Hockey Canada, TSN, and RDS have benefitted from a broadcast relationship that has built from grassroots programs and initiatives through to our national and international championships,” said Scott Smith, President and Chief Operating Officer, Hockey Canada. “The traditions and love of hockey have enabled us to share our vision of bringing fans closer to Canada’s game not just through viewership, but also through participation.”

“Hockey Canada has been an incredibly valued partner of TSN and RDS for decades, and we couldn’t be happier to reach this agreement and to continue to deliver this slate of world-class hockey events,” said Stewart Johnston, President, Media Sales and Marketing, Bell Media, and President of TSN. “Hockey Canada is the world leader in developing and promoting positive hockey experiences, from elite teams like we’ve seen over the last two weeks to the extensive grassroots programs it runs across the country. As Canada’s Sports Leader, we are thrilled to partner with Hockey Canada to help fulfill its mission, and we feel privileged to be the country’s long-term home for iconic hockey championships, including the World Juniors and so many more.”

Hockey Canada programming is also available to TSN and TSN Direct subscribers on TSN.ca and the TSN app.