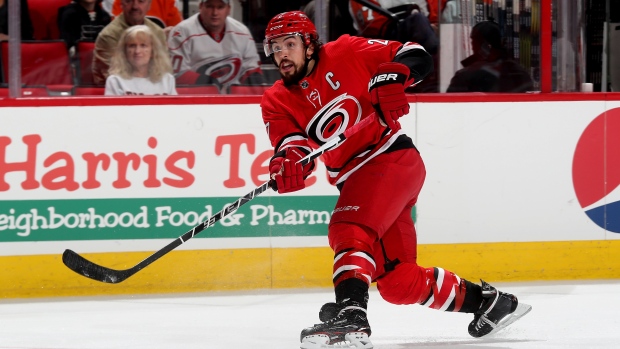 Will it be a busy day filled with movement? Would the Chicago Blackhawks consider parting with No. 3? What kind of splash will Ken Holland look to make in his first draft at the helm of the Edmonton Oilers?

We'll keep you up to date with all of the latest talk around the league heading into the 8pm et draft from Vancouver.

There has been considerable talk surrounding Carolina Hurricanes defencemen for the better part of the last year, so it shouldn't come as a surprise that hasn't changed in Vancouver.

Hearing that Carolina is shopping Justin Faulk today after this morning's meeting with the player's camp did not go particularly great regarding a possible extension. He's got one year left on his deal at a $4.83 M cap hit but $6 million in real cash

TSN Hockey Insider Pierre LeBrun reports the team is shopping Justin Faulk following a morning meeting with his representation regarding an extension that didn't go well.

As I always like to say, sometimes these things can come around like Edler did with Van after it looked like he was gone to market. But a year ago the 'Canes traded Lindholm after a similar Friday morning chat at the draft didn't go well with his camp https://t.co/GqXP4CHfJt

LeBrun cautions that this doesn't necessarily mean a divorce is imminent, but it reminds him of a similar meeting the team had last year with Elias Lindholm that led to his trade to the Calgary Flames later that day.

It's not draft or trade-related, but the NHL just released the date and opponents for all 31 teams' home openers:

P.K. Subban has three years and $27 million remaining on an eight-year contract, but could his big ticket be on the move?

Not getting caught up in semantics of “shopped” vs. “listening” — been there, done that, circa June, 2016 — but P.K. Subban’s name is out there floating around in the trade-sphere. NSH believed to be looking to clear cap space for either UFA shopping (Duchene?) or Josi extension.

TSN Hockey Insider Bob McKenzie reports that the 30-year-old defenceman's name has been floated in the lead-up to tonight's draft.

Why is that? Well, if the Nashville Predators intend to take a run at an unrestricted free agent or offer an extension to star blueliner Roman Josi, money will need to be moved.

Subban or Turris or something has to give for Nashville to be able to sign Josi long term plus add a piece or two... https://t.co/svzMrkRLhh

LeBrun notes that it could end up being a matter of the Preds moving Subban or centre Kyle Turris (five years with a $6M AAV remaining) to lock up Josi or add a piece.

Joonas Donskoi is open to staying with the San Jose Sharks, but is keeping his options open.

Joonas Donskoi’s camp have informed the Sharks they’re going to talk to other teams once the UFA speaking period opens Sunday while not closing the door on SJ. But also feels like might be time for a fresh start for him.

TSN Hockey Insider Pierre LeBrun notes that the 27-year-old winger has informed the Sharks that he plans to speak to other teams once the window opens on Sunday.

Donskoi had 14 goals and 23 assists in 80 games last season, his fourth in the NHL.

If you recall, Jason Zucker was nearly a Calgary Flame at the trade deadline last February, but a deal for the 27-year-old winger fell apart at the very last minute. Last week, Phil Kessel nixed a potential deal to the Minnesota Wild that would have sent Zucker to the Pittsburgh Penguins.

Could today be the day that the Wild finally move on from the King Clancy Memorial Trophy winner?

Despite previously unsuccessful attempts, a look at why the #mnwild might finally trade Jason Zucker this weekend: https://t.co/rv1rmeOxNJ

The Star Tribune's Sarah McLellan spoke to Zucker earlier this week and he said he's ready for whatever may come.

"I’m just focusing on my training and [getting] better and making sure that all the things I felt I didn’t do very well this year I’m getting better at and continuing to grow my game every year," Zucker told McLellan.

Why is the draft potentially important for Zucker? On July 1, a partial no-trade clause goes into effect that would limit GM Paul Fenton's options when it comes to a potential move.

It's been over six years since somebody has been offer-sheeted (the Calgary Flames signed Ryan O'Reilly to an offer sheet that was quickly matched by the Colorado Avalanche in 2013), but this summer's crop of restricted free agents could make the possibility enticing for some teams around the league. The most high-profile candidate for an offer sheet could be Toronto Maple Leafs winger Mitch Marner and this doesn't come as a surprise to GM Kyle Dubas.

"If there were an offer sheet, we would look at what they are, and what the compensation is for our team, and make a decision based off of that,” Dubas said of his team's impending RFAs on Thursday. “They’re all very important players for us. It’s our intention they’re here for as long as we can possibly keep them. But if the dollar amount doesn’t make sense as far as our internal economics, it will be a decision as to what we might do."

TSN Hockey Insider Darren Dreger weighed in on reports that Marner was seeking something in the range of teammate Auston Matthews's five-year, $58.17 million deal.

Like the Matthews contract, term is a huge sticking point for Marner. Not interested in max term. Remains committed to visiting with teams next week if there’s no agreement with Toronto. https://t.co/PnNptxOVIn

Dreger reports that while Marner isn't believed to be seeking a deal in the $11 million AAV range, he also isn't interested in a max term and will begin visiting with other teams next week if a deal can't be reached.

Remember - the compensation for signing a restricted free agent varies.

If a team were to sign Marner to a deal with an AAV greater than $10.59 million and the Leafs chose not to match, Toronto would he entitled to four first-round picks from the signing team. From $8.5 million to that $10.59M mark, it would be two firsts, a second and third.

There's a big reason for the relative inactivity, thus far.

Gary Bettman says the league is waiting on the NHLPA to sign off and there should be a salary cap announcement Saturday. My wine sense is it’s going to be either 81.5 or 82.

If GMs around the league still don't know exactly where the salary cap will be, they will be reticent to make moves, especially if they're up against it. Even $1 million, give or take, can make a big difference here. Once that figure is known, the floodgates might begin to open.

Zucker has four years remaining on a deal that carries an AAV of $5.5 million.

Happy first day of summer, everybody. If you're wondering why it might be a little quieter than usual on the day of a draft, don't forget it's on the west coast, so it's only a little after 9am there. Be patient.