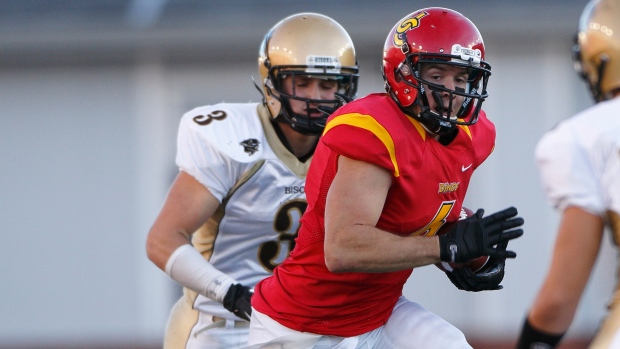 For Calgary native Jake Harty, pride in the community he grew up in was always important, and it was something preached to him by father Dave.

“I think what's happened to me, my Dad always preached you put on for your city,” Harty told TSN. “Why would you go somewhere else to beat your city when you have the choice to stay at home; so I think it was more in the family, my Dad preaching to stay where you are and put on for your city. This is where I'm from, born and raised.  I wanted to stay in Calgary, I think it's the best city in the world and I wanted to do good for my city.”

His Dad was also a football coach and he got Jake involved in the game early and getting involved with the game was a natural choice.

When Harty started playing the game his goal was to play in the city where he was born and raised but the local teams struggled when he was a young man.

In 2009 and 2010 Harty played Jr. Football for the Calgary Colts and at that time the Dinos program had started to turn around under Blake Nill. He and the Dinos coach were already familiar with each other and Harty made no secret of his desire to play for the Dinos.

“It's a funny story,” Harty remembered.  “My girlfriend had a cabin near one of my ex-assistant coaches and that's when I first met Coach Nill, in grade 10.  It was kind of imprinted on my brain in Grade 10 to stay in Calgary.  I just thought when I came out of high school, Coach Nill was there and he had re-built the program and I knew that I wanted to stay there in Calgary to play my football."

He would eventually end up with the Dinos in 2011 and made an immediate impact scoring a touchdown the first time he touched the football on an 88-yard kickoff return.  He finished with nearly 900 all-purpose yards that season.  Harty was a consistent target for the Dinos, never finishing with less than 50 catches in the regular season and playoffs over the next three years.

He is part of a very strong class of receivers lead by Simon Fraser receiver Lemar Durant (not part of the CFL’s top 20 prospects because it was determined late that this is his draft year), Manitoba’s Nic Demski, and Regina’s Addison Richards.  TSN’s CFL Draft analyst Duane Forde thinks Harty will make waves on Draft day.

“He doesn’t have as high a ceiling as some of the more athletic receivers, but this four-year starter is one of the more CFL-ready prospects in this draft class,” Forde wrote on tsn.ca. “Harty played in a very balanced offence, but he easily could’ve been a dominant player, as evidenced by his school-record 15-catch performance in the 2012 Hardy Cup game.”

Harty’s goal at the CFL Combine was to show teams that he was a hard worker willing to do what it takes to play professional football.  He was hoping to put up good numbers in the running and jumping drills. His broad jump of 10 feet, 8 inches was the best among the receivers and he hit a 35-inch vertical jump, second best among the group.

He managed to do just that and as one anonymous GM told Kirk Penton of the Winnipeg Sun, he thought that while Harty was not likely to be picked in the first round he had the potential to end up being the best receiver from this CFL Draft class.  While Harty thinks it would be ‘awesome’ if his hometown Stampeders were to pick him, all he wants to do is realize his dream and get to the CFL.

“When it comes to the draft it doesn't matter who I get drafted by,” Harty explained. “Whatever team drafts me, it just shows they’re willing to give me an opportunity to come and try to make their football team and that's what the next step will be"

Our next profile will be on Ottawa defensive linemen Ettore Lattanzio, the 20th ranked prospect in the 2015 CFL Draft.