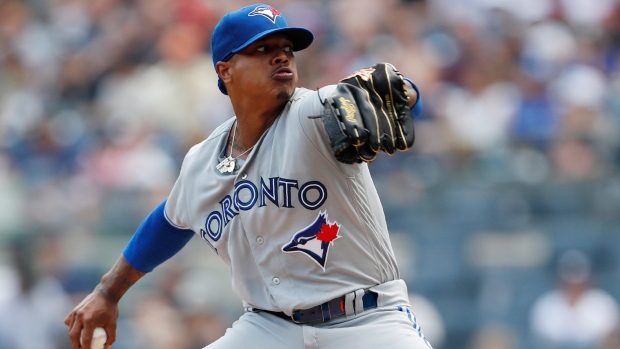 The Major League Baseball trade deadline is set for 4pm et on Wednesday. Action has been quiet thus far as teams attempt to navigate the first season without a waiver deadline and only one shot to get it right. Follow along with TSN.ca's MLB Trade Rumours Blog.

Try this one on for size.

According to The Athletic's Ken Rosenthal, one of many scenarios the New York Mets are exploring is trading right-hander Noah Syndergaard to the San Diego Padres and then using some of that return to acquire starter Marcus Stroman from the Toronto Blue Jays.

One of many scenarios #Mets are exploring, per sources: Syndergaard to #Padres, then using some of return to land Stroman from #BlueJays. Not known which players would go from SD to NYM if deal occurred. RHP Cal Quantrill, a Canadian native, would be logical target for TOR.

Rosenthal adds that it's not known which players would go from San Diego to the Mets in a potential deal, though he adds Canadian Cal Quantrill would be an logical fit for the Blue Jays.

In this scenario, #Mets would not simply add Stroman from #BlueJays. They would acquire pieces from #Padres as well. #Astros also mounting push for Stroman due to their reluctance to meet NYM’s price for Syndergaard. Other teams also in mix for Jays’ ace. https://t.co/nL0E6MeP9l

Rosenthal reports the Houston Astros are another team making a push for the Blue Jays' ace due to their reluctance to meet the Mets' price for Syndergaard. He adds that "other teams" are also in the mix for Stroman.

A source told Joel Sherman of the New York Post that the Mets are "definitely trading Syndergaard," though no deal was imminent as of Friday night. Meanwhile, a source told Anthony DiComo of MLB.com that it is "50-50" the Mets trade Syndergaard by Wednesday afternoon.

Sherman adds the expectation is that the Mets will "grind" and try to extract as much as possible, hoping action picks up on Syndergaard as the clock ticks closer to Wednesday's deadline. According to the report, the Mets are looking for a rotation-ready starter and a few top prospects in exchange for the 26-year-old.

Sherman also notes the likelihood of moving closer Edwin Diaz has increased. The Dodgers are known to have interest in Diaz, while the Atlanta Braves, Philadelphia Phillies, Oakland Athletics, St. Louis Cardinals and Minnesota Twins are all reportedly looking for help in the bullpen.

Diaz was acquired last winter in a blockbuster trade with the Seattle Mariners.

Rosenthal says the Dodgers would be interested in Stroman and may consider moving a starter to the bullpen with a lack of relievers available on the market.

Coming into Saturday, the New York Yankees' starters have allowed 40 runs over their last five games. They've lost two in a row and have surrendered a total of 29 runs their last two games.

General manager Brian Cashman told reporters the club is looking for help on the mound, both in the rotation and in the bullpen.

"Don't really see much, if anything, on the position-player side to be dealing with. Our main focus is pitching and seeing if there are any matches on the pitching front," Cashman said, via ESPN's Coley Harvey.

While Cashman did express desire to add to his pitching staff, he maintained the organization is willing to "maintain what we have on our current roster."

According to Bryan Hoch of MLB.com, a cross-town deal for Noah Syndergaard or Zack Wheeler appears to be a long shot. Hoch adds the likeliness of a Madison Bumgarner or Trevor Bauer deal has decreased.

The Atlanta Braves have shown interest in Kansas City Royals relievers Jake Diekman and Ian Kennedy according to Mark Bowman of MLB.com.

MLB.com's Mark Feinsand reported Friday the Royals could be "getting closer" to moving Diekman.

Bowman adds the Braves have also had conversations with the Texas Rangers about Jose Leclerc and Mike Minor, who pitched for Atlanta from 2010 to 2014.

After acquiring left-handed pitcher Jake Diekman from the Kansas City Royals, it appears the Oakland Athletics have some more trades in mind according to The Athletic's Ken Rosenthal. The A's reportedly have interest in New York Mets pitcher Zack Wheeler as well as Cincinnati Reds pitcher Tanner Roark.

#Athletics do not figure to stop with Diekman and Homer Bailey, both of whom they acquired in separate trades from #Royals. Per sources, they have explored adding another starting pitcher, with #Mets’ Zack Wheeler and #Reds’ Tanner Roark among their targets. @TheAthleticMLB.