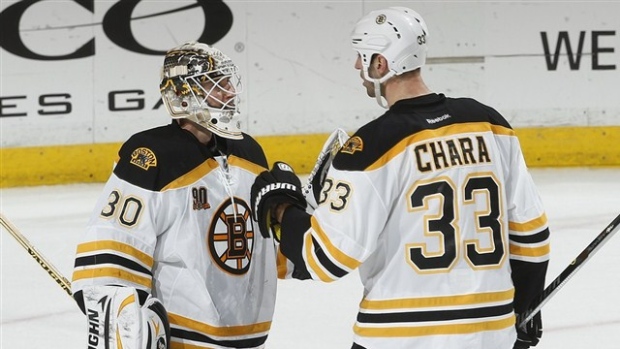 With the NHL regular season right around the corner, TSN.ca profiles each team leading up to puck drop. Next up is the Boston Bruins, who are done licking their wounds after a second round loss to Montreal last spring and look to return to the Stanley Cup Final for the third time in five seasons. Catch up on their summer moves and the issues they face this season, as well as Craig Button's analysis of their top prospect and an analytical breakdown by TSN's Scott Cullen.

The Boston Bruins had one of their best regular seasons in franchise history in 2013-2014, winning the Presidents' Trophy with 117 points. They scored a ton, played great defensively, hit everything they could see and were the best home team in the league - recording 31 wins at TD Garden.

Jarome Iginla had a great year in his one and only season in Beantown, scoring 30 goals which tied him for the team lead with Patrice Bergeron. Pesky forward Brad Marchand had another solid campaign while Zdeno Chara was a rock on the blue line, scoring 17 goals and 23 assists with a plus-25 rating.

Loui Eriksson, who came over in the Tyler Seguin deal with the Dallas Stars, struggled in his first year with the Bruins. He suffered a concussion in January and scored just 10 goals over 61 games.

Maybe the biggest performance came from the man between the pipes. Tuukka Rask signed a new eight-year, $56 million contract prior to last season and was worth every penny in 2013-14. The 27-year-old posted a 36-15-6 record with a 2.04 goals against average and a .930 save percentage. He also led the league with seven shutouts.

All that success was quickly forgotten, though, as Boston was ousted on home ice in Game 7 of the second round by their hated rivals the Montreal Canadiens. The Bruins had a 3-2 series lead heading into Game 6 at the Bell Centre but were shut out. Two nights later, they gave a disappointing effort in a game they never seemed to be in and were finished.

To make matters worse, gritty power forward Milan Lucic reportedly threatened the Habs' Dale Weise and Alexei Emelin during the post-series handshakes. Not a great ending for a team that was vying for redemption after a heartbreaking loss to the Chicago Blackhawks in the 2013 Stanley Cup Final. 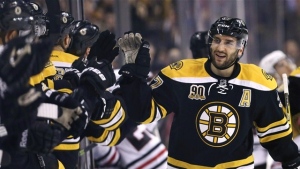 The B's also dealt with some injuries down the stretch, most notably the loss of shutdown defenceman Dennis Seidenberg who missed the final 44 games of the regular season and the entire playoffs with a torn ACL and MCL. Boston could have used Seidenberg's defensive prowess against Montreal. Depth forward Chris Kelly missed the postseason with a herniated disc while Lucic played through a bad wrist.

Another reason for Boston's early exit was their sudden inability to score. They had the third-most goals during the regular season, but struggled against the Habs, only averaging 2.2 goals per game in the series. David Krejci was the team's leading point-getter last season, but failed to score a goal in the playoffs. The same goes for Marchand, while Bergeron only had three.

Games 1-20: A shutdown defence, with outstanding goaltending, got the Bruins off to a good start.

Games 21-41: Percentages dipped, but countered by improved possession stats. Goal differential was relatively close due to a couple of lopsided losses to Detroit and Vancouver.

Games 42-62: Really started steamrolling in the second half, with killer possession numbers, led by Bergeron, Marchand and Smith.

Games 63-82: Dominant down the stretch, with two regulation losses in the last 23 games.

Strapped by the cap, the Boston Bruins did next to nothing significant this off-season. But make no mistake, the Bruins are top of the line contenders for the Stanley Cup again in 2014-15.

General manager Peter Chiarelli couldn't add a piece in free agency even if he wanted to, as Boston simply does not have the salary space. According to Capgeek, the club is nearly $1 million over the ceiling as it stands and that's without factoring in Krug or Smith who are unsigned restricted free agents. There's been plenty of speculation that the club could trade one of their NHL-caliber blueliners to make room.

These losses are concerning, but shouldn't be devastating. 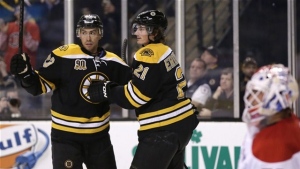 With the absence of Iginla, the Bruins now likely look to Eriksson to help fill the void. He had a down year last season, but that can certainly be attributed to new adjustments and dealing with concussion symptoms. When healthy, Eriksson can put the puck in the net at a very rapid rate. Over four seasons from 2008-2012, the left winger scored no fewer than 26 goals and 63 points. Boston hopes the Eriksson of old is back this year.

The B's were able to give Rask plenty of rest last year because they had a solid backup in Johnson. Rask appeared in 58 games during the regular season and was ready for the playoffs. That might not be the case this time as they'll likely have to depend on Niklas Svedberg to fill in for the odd start. The 24-year-old has only played in only one career game, a victory with the Bruins last season. Time will tell if Svedberg, the AHL's top goalie just two seasons ago, can fill that role.

The healthy returns of Seidenberg and Kelly should pay dividends for Boston, who could have used them against the Habs.

David Pastrnak is a very gifted offensive player. He possesses all of the elements necessary to contribute offence in the NHL. He's very smart and anticipates opportunity where he can threaten.

He also has very good quickness in his skating and is capable of beating out defenders to space. And with his quick hands he can get a shot off quickly or make a deft pass in traffic. He has lots of confidence in his skill and competes to make a difference in the game.

The most notable piece acquired in the Tyler Seguin trade last year, Eriksson endured a rough first season with the Bruins, suffering multiple concussions and finishing with 37 points in 61 games, his lowest points per 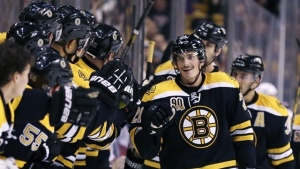 With a fresh start to this season, though, there is an opportunity for Eriksson to return to a regular top-six role, likely starting the year alongside Milan Lucic and David Krejci. If that combination works, the always-responsible Eriksson should recapture some of his offensive flair.