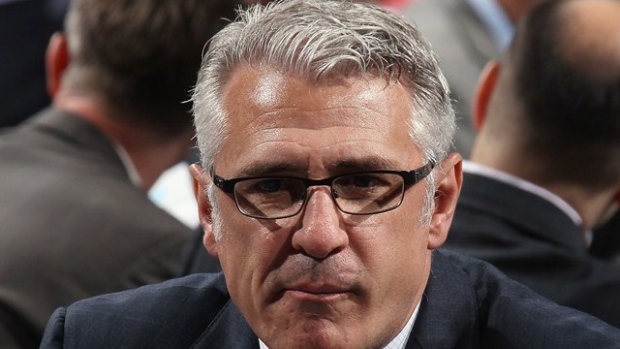 With the NHL regular season right around the corner, TSN.ca profiles each team leading up to puck drop. Next up is the Carolina Hurricanes, who have a fresh start with new general manager Ron Francis and head coach Bill Peters at the helm. Catch up on their summer moves and the issues they face this season, as well as Craig Button's analysis of their top prospect and an analytical breakdown by TSN's Scott Cullen.

The 2013-14 season stretched the Hurricanes' run of early summers to five straight years. The last time the franchise missed five in a row was when they found themselves on the move from Hartford.

The first half saw the Hurricanes fall into extended lapses. While the 15-16-9 record they posted as the calendar rolled over might that bad on paper, beneath it was three losing streaks of at least four games. The Canes seemed to be perfectly capable of equaling the opposition for 60 minutes, but of the dozen games they forced to an extra frame or shootout they only emerged with the bonus point in three.

And one of the biggest issues for the Canes in 2013-14 was between the pipes.

Long seen as a franchise pillar in net, Cam Ward may have had his worst year as a pro. He battled injuries all season long and missed 23 games with lower body injuries. When he was in net, the results were rarely 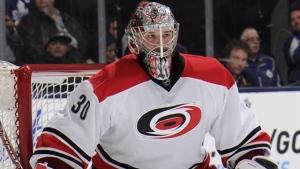 stellar, as the 30-year-old posted a seven-year low .898 save-percentage and a goals-against average of 3.06.

To make matters worse, back-up Anton Khudobin was hurt in early October, forcing Justin Peters into regular duty as the Canes' starter for extended stretches in November and December.

The Canes kept pace in the new Metropolitan Division through October. But once November struck, a steady downfall kicked in and despite a 10-4 January run, the team was out of playoff positioning for the rest of the season and earned its fourth Top 10 draft position in five years.

Games 1-20: Couldn't score, and every win was by a one-goal margin, yet goaltending kept them treading water.

Games 42-62: Continued to improve possession, goaltending bounced back, but scoring was still subpar.

Games 63-82: Continued their break-even ways, with below average possession and shooting, countered by above-average goaltending, thanks to Anton Khudobin.

The dominos fell on the Canes' front office and coaching staff in the spring.

The only general manager the Hurricanes have ever known moved to a divisional rival in Pittsburgh. Jim Rutherford, who was there so long he may still have business cards kicking around that read, 'Whalers,' stepped aside and former franchise player Ron Francis began his managerial career.

Kirk Muller was also out as head coach, replaced by Bill Peters - a former Detroit Red Wings assistant who has never been an NHL head coach but was in demand this off-season.

Francis didn't make any major moves over the off-season, leaving the core to kickstart the road to improvement.

They aren't lacking talent with scorers like Eric Staal, Skinner and Alexander Semin forming the front end of their ranks. 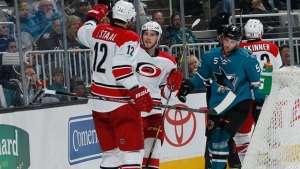 Jordan Staal had a down year in 2013-14, posting 40 points despite logging 82 games for the first time since 2009-10. Jiri Tlusty, too, suffered a drop-off after enjoying a breakout season in the lockout-shortened 2012-13 campaign. After a career-best 23 goals in 48 games, Tlusty netted just 16 in 68 games with the 'Canes in 2013-14. If the two of them can lift their offensive games, it should provide a much needed second attack wave for the Canes.

The Canes also have options from the point when it comes to scoring with 28-year-old Andrej Sekera enjoying a career-best 44 points last season while Justin Faulk continued to develop with 32 in his third NHL campaign. If Ryan Murphy can contribute full-time minutes for a whole year and John-Michael Liles can re-discover his 30-point form, the Canes could resuscitate their 28th-ranked power play.

Of course, the team needs to keep goals out of the net, too.

The addition of PK-specialist Jay McClement helps, but their defensive fortunes will come down to what kind of year they get in net.

With two years left at a cap hit of $6.8 million, trading Ward is next to impossible. If he doesn't bounce back, Khudobin is ready. He was extended for two years at a total of $4.5 million after passing his one-year audition last season. His .926 save-percentage and 2.30 goals-against suggests the Canes can compete well with him.

Haydn Fleury's exceptional skating ability allows him to impact the game multiple ways. Turning and going back for the puck makes him very difficult to forecheck and thus less time in the defensive zone for his team.

The ability to transition is so important and combined with very good sense and understanding of what is unfolding, Haydn can support the offensive attack also. A very calm player who plays with a competitive edge.

Coming off a rookie season in which he tallied 21 points in 58 games, spending some time with the Swedish National Junior Team (where he scored nine points in six tournament games), 19-year-old Lindholm has 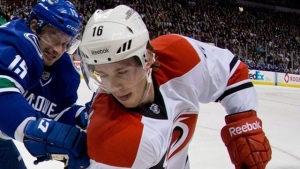 With limited competition at the top of the Hurricanes' roster, there should be a very good opportunity for Lindholm to play in a top-six role which, combined with the likelihood of improving his on-ice (shooting and save) percentages and hopefully something close to a full season of games, could result in a sizeable jump in production.