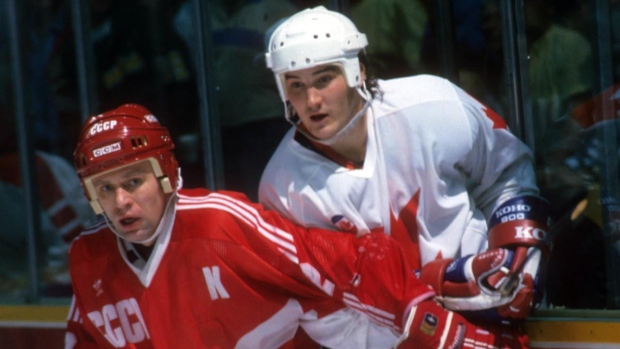 The year is 1987 – Wang Chung is blaring on the radio, the Edmonton Oilers had just won their third Stanley Cup in four years, and two of hockey’s most dominant players of all time, Wayne Gretzky and Mario Lemieux, are about to take the ice and play on the same line for the first and only time in their careers. The 1987 CANADA CUP captured the attention of the hockey world and is considered by many to be the finest exhibition of hockey in the game’s history.

TSN revisits the final best-of-three series of this tournament between Canada and the Soviet Union, beginning with Game One on Friday, May 8 at 7:30 p.m. ET on TSN4 and TSN5. Team Canada’s roster featured 12 future Hockey Hall of Famers pitted against the stars of the Soviet Union, many of whom were still a couple years away from making their way to the NHL. Each of the three games was a battle to the bitter end, as the series required overtime, double overtime, and one epic comeback. A complete schedule is available here.

Over the coming weeks, TSN continues to deliver a packed slate of classic Hockey Canada moments from recent years, highlighted by:

Reliving Team Canada’s victories in World Juniors Gold Medal Games in 2015 and 2020, both against Team Russia, on Thursday, May 7
Legendary performances from Jonathan Toews at the 2007 IIHF WORLD JUNIOR CHAMPIONSHIP, highlighting his heroics in Team Canada’s semifinal matchup and Gold Medal Game, on Thursday, May 14
All three of Team Canada’s round robin games at the 2013 IIHF WORLD JUNIOR CHAMPIONSHIP, starring a roster dubbed ‘The Next Dream Team’, on Saturday, May 16

More classic Hockey Canada games on TSN will be announced in the coming weeks.