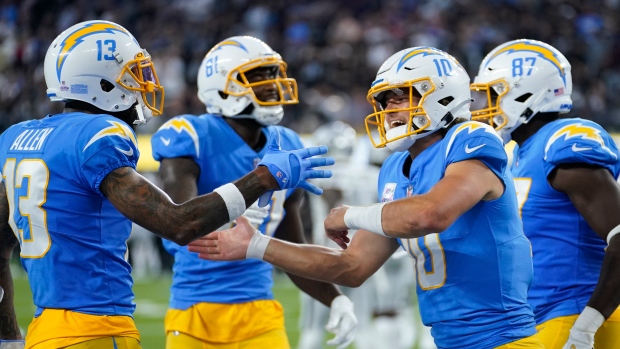 The Los Angeles Chargers were 33-to-1 to win the Super Bowl entering Week 1 of the NFL season.

In fact, the Chargers still aren’t even the favourite to win their own division.

Is L.A. being undervalued in NFL futures markets?

Are Chargers still being underestimated?

It was Herbert’s sixth career game with three touchdown passes, which is tied for the most through a player’s first two seasons.

Herbert entered the season at 20-to-1 to win the NFL regular season MVP. He’s now +900 to win that award.

Justin Herbert, who did it in Week 5 last season. pic.twitter.com/xLo202KJmN

Meanwhile, the L.A. defence looked dominant in the first half of Monday night’s win. Las Vegas didn’t have a single first down in the opening quarter.

They finished the half with 51 yards of offence and one first down, which are their worst half-time totals since Jon Gruden returned in 2018.

So, are the Chargers the best team in the AFC West?

New team on top in the AFC West 😏 @chargers pic.twitter.com/SXOmWX0rok

They own the best record in the division entering Week 5 at 3-1, with key division wins over Las Vegas and the Kansas City Chiefs.

While the Chiefs remain the betting favourite to win the division, their odds to finish first in the AFC West have shifted from -290 to -110 since the start of the season.

With a head-to-head win over Kansas City, a one-game lead atop the division and a slightly easier strength of schedule the rest of the way, I think there’s value betting the Chargers at +230 to win the division.

After an L.A. win and cover, NFL favourites improved to 35-27 straight up with two pick ‘ems.

However, underdogs still have the edge against the spread with a 37-25 ATS record.

Meanwhile, Monday night’s game stayed under the total of 52 points. The under has a 37-27 record through the first four weeks of the season.

The winner will advance to the ALDS to face the Tampa Bay Rays.

The cards have been dealt. The stage is set. #SquadUp pic.twitter.com/Vokz1bWMot

As of this morning, the Yankees are a -125 road favourite.

This could be a low-scoring game, as the total has been bet down from 8.5 to 8.

New York went 89-69 to the under during the regular season, while Boston went 85-74 to the under, so it makes sense that some money came in on the under with Gerrit Cole and Nathan Eovaldi set to start tonight.

While Boston had the slight edge in the season series, the Yankees were red-hot in the month of September, including a three-game sweep against the Red Sox.