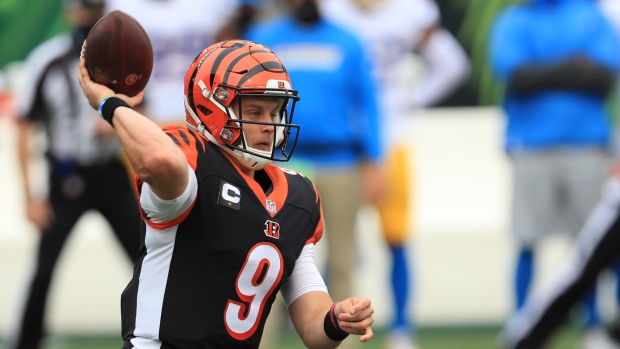 We’ve been treated to some wild games in prime time to start the season, let’s hope this is one of them.

This week we have the 2-1 Cincinnati Bengals taking on a Jacksonville Jaguars team that’s looking to snap an 18-game losing streak.

This matchup features two of the game’s youngest and brightest quarterback prospects, with Joe Burrow and Trevor Lawrence sharing the field again for the first time since the 2020 NCAA National Championship game.

The last time these two QBs met, it was Burrow tossing for 463 yards and six touchdowns in a 42-25 win over Clemson as LSU completed its perfect season with a national title.

The Jacksonville Jaguars opened up the 2020 season with a 27-20 win over the Indianapolis Colts.

And they haven’t won a game since that Sept. 13th contest.

That’s right, 18-straight losses for Jacksonville has them tied with the 1972-73 Houston Oilers for the fifth-longest losing streak in NFL history.

On Thursday night, Lawrence and his Jags will need to generate some more offence if they want to put an end to their losing ways.

After throwing for three touchdowns in his NFL debut, Lawrence has racked up just 337 passing yards with two touchdowns, while turning the ball over six times in his last two games.

As a team, Jacksonville ranks 27th this season in points scored and are 31st in percentage of scoring drives that end in points.

Lawrence, after throwing just 17 interceptions in 40 NCAA games, has already been picked off seven times this season and enters the game -225 to throw another one.

Lawrence’s favourite target this season has been Marvin Jones, who has caught 17 of his 28 targets for 194 yards and two touchdowns.

Jones enters the game with an over / under of 65.5 receiving yards and is +200 to find the endzone.

On defence, the Jaguars have allowed more than 30 points against in two of their three games and have given up at least 390 yards of offence in all three.

Riding high from their 24-10 win over the Pittsburgh Steelers, Cincinnati enters this game in rare territory.

The Bengals have been favourites at Paul Brown Stadium just three times over their last 16 home games.

And now they enter Thursday night as a touchdown favourite.

Second-year quarterback Joe Burrow has thrown for 640 yards and seven touchdowns to start the season.

Running back Joe Mixon is off to a solid start to his season as well. The 25-year-old has racked up 286 yards on the ground to start the season and has topped at least 69 yards in all three games.

Mixon enters Thursday night with an over / under of 84.5 rushing yards and is -170 to score a touchdown, despite having only one score in three games.

A standout for the Bengals this year has been rookie wideout Ja’Marr Chase who has gone for 220 yards, 11 catches and four touchdowns in his first three weeks in the league.

Chase and Burrow go back to their days at LSU together.

The last time we saw these two together in primetime on national television was their final game together in college, when Burrow connected with Chase nine times for 221 yards and two touchdowns.

The Bengals opened as a seven-and-a-half point favourite and the line has stayed right around that number.

The same cannot be said for the total, however as it opened at 49 before quickly dropping to 47.5 and it now sits at an even lower 46.5.

Cincinnati is 2-1 against the spread this season, and are just 1-2 as home favorites since head coach Zac Taylor took over at the start of the 2019 season.

Jacksonville enters this game not only looking for their first win, but looking to cover for the first time as well.

The Jags are one of four teams (New York Jets, Washington, Kansas City) to not cover the spread this season.

However, Jacksonville was a modest 4-4 last season on the road ATS.