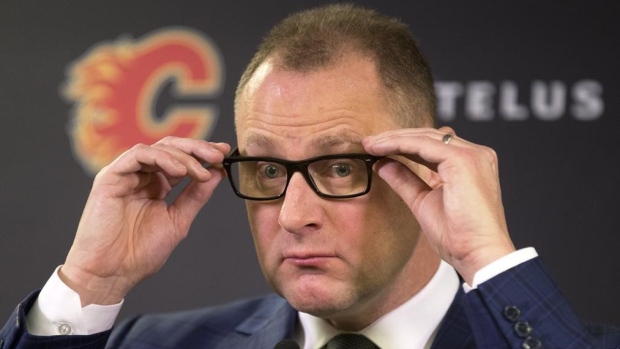 With the 2020 NHL Draft looming, TSN Hockey provides a draft primer for each of the seven Canadian NHL clubs. Today, we continue with the Calgary Flames.

2019 REVIEW
The uncontested most heartwarming moment of the 2019 draft in Vancouver was when Calgary selected goalie Dustin Wolf with the fourth-last pick (No. 214). It was met with a huge cheer as Wolf walked down to the floor to get a Flames sweater. The 6-foot Everett Silvertips’ puckstopper rewarded Calgary with a remarkable season, winning CHL goaltender of the year honours. Flames’ first pick Jakob Pelletier (No. 26) was named a second all-star forward and the Quebec League’s most sportsmanlike player in 2019-20.

GRADING THE LAST 5 DRAFTS
The Flames turned in A efforts in the 2015 and 2016 draft, according to TSN Director of Scouting Craig Button, who assigned grades for each of Calgary’s past five drafts. Calgary earned the top marks two different ways, harvesting three NHLers from nine picks in 2015 and three from only five in 2016. Rasmus Andersson (2015, No. 53), Oliver Kylington (No. 60) and Andrew Mangiapane (No. 166) represent making the most of a draft in which Calgary didn’t pick in the first, third or fourth rounds. Matthew Tkachuk (2016, No. 6), Dillon Dube (No. 56) and Adam Fox (No. 66) represent picks from each of the first three rounds. Fox was traded to Carolina in 2018 and subsequently dealt to the New York Rangers; he finished third in rookie defenceman scoring in 2019-20 (42 points in 70 games). 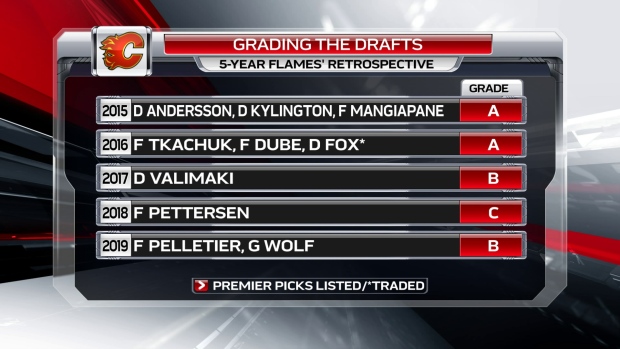 FLAMES TREND
Since taking Juuso Valimaki with the No. 16 pick in 2017, the Flames have made 14 consecutive picks without taking a single defenceman. This is how Calgary’s 15 selections in the past three drafts break down: 13 forwards, one defenceman, one goalie. One more note: If Calgary makes picks in the first and second rounds this year, it will be the first time they have done so since 2016. 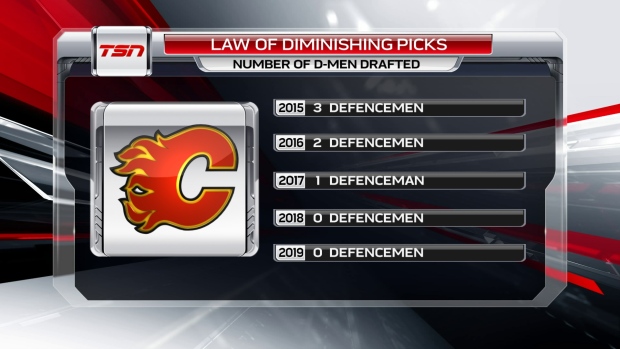 FLAMES' TOP 10 PROSPECTS: GRADE C
With a total of just three selections in the first three rounds over the past three drafts - it should come as no surprise the Flames have a shallow talent pool, earning the Flames a C grade from Button. It’s most evident on the blueline, as you would expect since Calgary has picked one defenceman over that period of time. The Flames have two rearguards among the top 10 – both of them collegiate free agent signings, 24-year-olds Connor Mackey and Colton Poolman. 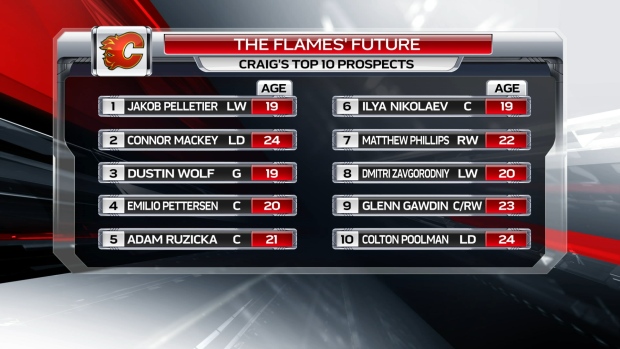 2020 LOOKAHEAD
The Flames have the No. 19 pick, but Button wonders if they will make it. Big Deal Brad Treliving has a well-earned reputation for making trades at the draft, making substantial swaps four years running (2015-2018). With Cam Talbot an impending UFA and David Rittich hitting UFA status in 2021, will Treliving be hunting for a goalie? If so, the Flames first round pick could be in play. A reminder the GM traded an early second round pick (No. 35) for goalie Brian Elliott in 2016.

DRAFT POLL RESULTS
Button identifies the Calgary Flames’ biggest needs as goaltending and defencemen. We asked: Which defenceman from this group of four players projected to be available would you select for Calgary at No. 19?

CRAIG'S CHOICE:
Barron brings heady play, puck-moving skills and a good all-around game. He missed three months of the 2019-20 season with a blood clot. He returned to play seven games before the pandemic pause. Barron will have the opportunity to play two more games before the Oct. 6 draft with the Mooseheads playing back-to-back Oct. 2-3 against Cape Breton.