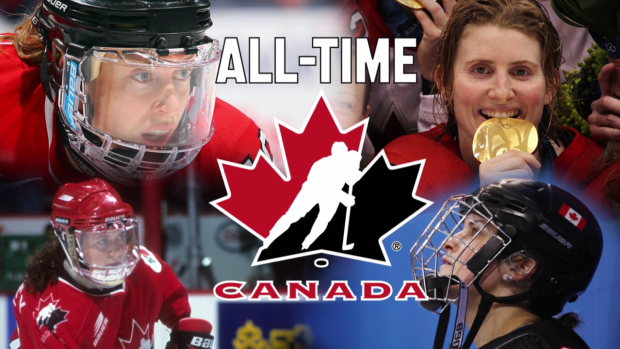 They have all been inducted into the Hockey Hall of Fame and are automatic choices for the all-time Team Canada.

Each of them is a flag bearer for the sport, metaphorically and literally in the cases of Goyette and Wickenheiser, who carried the flags for the Canadian team in the 2006 and 2014 Olympic games, respectively.

The five Hall of Famers are joined by 19 others, including three players who combined for four golden goals against USA along the way to Canada’s 14 gold medals in World Championship and Olympic competition.

- Nancy Drolet scored overtime winners in the 1997 and 2000 World Championships. The 1997 winner was Drolet’s third goal of the game.

- Caroline Ouellette scored 1:50 into overtime to settle the 2012 World Championship.

- Marie-Philip Poulin forced a fourth period with a last-minute goal in the 2014 Olympics and then scored the winner in overtime.

While the United States has dominated World Championship competition since 2008, winning eight of nine tournaments, Canada has saved its best for the Olympics, earning gold in 2010 and 2014.

Canada lost to the Americans in a shootout in 2018.

It was the sixth of eight consecutive Olympic and World gold-medal games that were settled in OT or a shootout.

Three members of the 2018 Olympic team – Poulin, Meghan Agosta and Jocelyne Larocque – are on the all-time team. 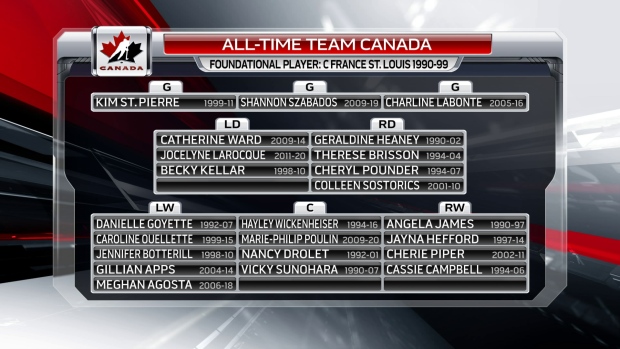 Goalie Shannon Szabados
Szabados recorded a 28-save shutout in a 2-0 gold-medal win over USA and was named best goalie at the 2010 Olympics.

Goalie Charline Labonte
Labonte shares the record for most Olympic gold medals (three) won by a goalie with St. Pierre.

LD Catherine Ward – Geraldine Heaney
Ward was a tournament-leading plus-15 in the 2010 Olympic triumph and regarded as a player close to Heaney in style and impact. Heaney scored one of the most memorable goals in Team Canada history – a spectacular Bobby Orr-like effort in the first-ever Women’s World Championship in 1990.

LW Danielle Goyette – C Hayley Wickenheiser – RW Angela James
The Hall of Fame Line. James and Wickenheiser were the faces of the game and Goyette was the feet, blazing down the ice and scoring goals. James was a virtually unstoppable force of imposing strength and skill during her pioneering career. Wickenheiser holds virtually every major individual scoring record in Olympic and World Championship competition. Goyette won a World Championship-record eight golds.

Head Coach Mel Davidson
Davidson was head coach of four global title-winning teams (including two Olympic golds) and an assistant coach of three more (one Olympic gold). That means Davidson has been a coach for fully 50 per cent of Canada’s 14 total titles.

Who is the greatest omission from the all-time Team Canada?