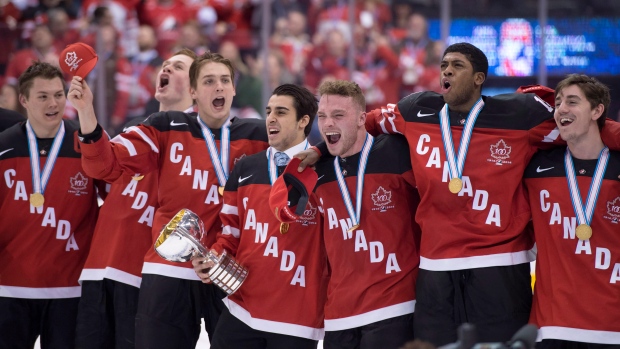 Last night’s game ranks as the most-watched World Juniors game ever – 6% higher than the 2011 Gold Medal Game (6.7 million viewers on TSN and RDS).

Overall, 13.4 million unique Canadian viewers tuned in to watch Team Canada reclaim World Junior gold.  Audience levels on TSN and RDS peaked at 9.7 million viewers at 10:31 p.m. ET in the game’s dying seconds as Canada held on for the victory.

“Team Canada’s gold medal performance at the World Juniors has once again inspired fans across the country, and this massive audience demonstrates that fan engagement in the tournament has reached staggering new heights,” said Stewart Johnston, President of TSN. “Everyone at TSN is so proud to showcase the drama and excitement of this incredible tournament for viewers in Canada and around the world.”

“This IIHF World Junior Championship proved once again the passion Canadians have for hockey, and for this tournament,” said Tom Renney, president and chief executive officer of Hockey Canada. “We are extremely proud of the work TSN and RDS did this year in Toronto and Montréal, and have done over the last 25 years. The networks have played an integral role in growing the World Juniors into the holiday tradition it has become, and we are thrilled to continue to strengthen our partnership with Canada’s Sports Leaders.”

Complementing the television broadcast, TSN and RDS Digital platforms set a new standard for fan engagement during the tournament. Highlights include: