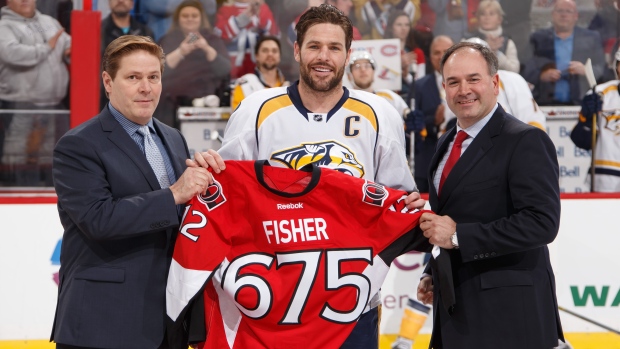 Below is the article published to TSN.ca on February 11, 2011 when Mike Fisher was traded by the Ottawa Senators

The Ottawa Senators' rebuild is in full swing as Mike Fisher is on his way to the Nashville Predators in exchange for Nashville's first-round pick in the 2011 Entry Draft and a conditional pick in the 2012 Draft.

"We were seeking a top-six forward and Mike Fisher was the player we set our sights on," Predators general manager David Poile said in a statement. "He plays playoff-style hockey all season long. He plays on the power play, kills penalties, is strong on draws and can match up against any opposing line."

The conditions of the 2012 draft pick are as follows.  The Senators will receive Nashville's third rounder if the Preds win one playoff round.  That pick would then turn into a second-round pick in 2012 if the team wins two or more rounds.

The Predators defeated the Anaheim Ducks in the first round of the 2011 playoffs, but were then defeated in six games by the Vancouver Canucks.

With the Predators' first-round pick, the Senators selected right winger Stefan Noesen 21st overall in the 2011 NHL Draft. Noesen was traded in 2013, before ever playing a game for the Senators, along with Jakob Silfverberg and a 2014 first-round pick to the Anaheim Ducks for Bobby Ryan. Noesen appeared in 14 games with the Ducks before being waived last season and then claimed by the New Jersey Devils. He posted six goals and two assists in 32 games with the Devils and was re-signed to a one-year, two-way contract last month.

With the third-round pick acquired in the Fisher trade, the Senators selected Jarrod Maidens from the Owen Sound Attack. Maidens was forced to retire later in 2011 after a career-ending concussion.

Poile said he felt Fisher's proven ability in the post-season made the deal a no-brainer.

"Mike's playoff experience will be invaluable to our team and he immediately makes our team stronger and deeper," Poile said.

The Peterborough, Ontario native is married to country music superstar Carrie Underwood so the move to the 'Music City' should fit well with their lifestyle, something Fisher acknowledged in an interview with SensTV Online.

"They're a very good team, and it'll be kind of like going home for me," Fisher said. "I'm sure my wife won't be disappointed, either. But I think it's a great place for me and family and everything."

Fisher, who was beloved in the Nation's Capital region for his countless hours of community service, took the opportunity to thank the fans for their support over the years.

"Thanks for 11 great years," Fisher said to SensTV.  "I wish I could have done more.  There are so many great memories that I'll never forget."

The 30-year-old Fisher has struggled this season with just 14 goals and 10 assists in 55 games but remains a strong two-way threat with great penalty-killing abilities.

Fisher has spent all 10 of his NHL seasons in the Nation's capital and helped lead the Sens to the Stanley Cup final in 2007.

Originally a second round pick, 44th overall by the Senators in the 1998 NHL Entry Draft, Fisher has 167 goals and 181 assists in 675 career games.

His teammates said that they had a difficult time saying goodbye.

"He's a good friend of mine," said Senators captain Daniel Alfredsson.  "We've gone through a lot of things together and played together for a lot of years so it's hard.  At the same time we are in a business where results matter.  I hope for Mike that he goes to a team where he can have some success and get back to playing and enjoying the game the way that he should."

The Los Angeles Kings were also in the running for the rugged-two way forward.

The move gives the Senators a great deal of financial flexibility as Fisher is set to earn $4.2 million a season over the next two years.