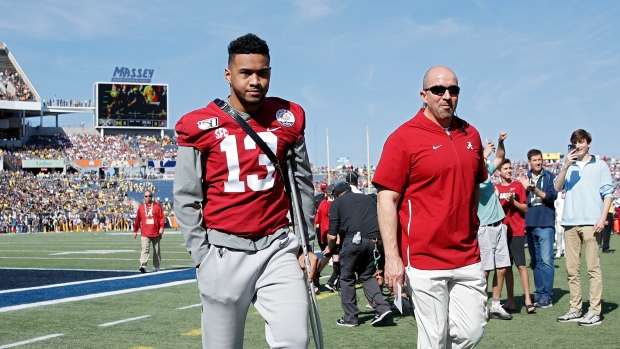 INDIANAPOLIS — Tua Tagovailoa climbed up a couple stairs, then walked to the podium without a hitch Tuesday.

It was a promising start to a critical week.

Eventually, the former Alabama quarterback revealed what NFL scouts eagerly awaited: He should be cleared to resume all football activities March 9 and will hold his pro day workout April 9 — exactly two weeks before the NFL draft.

“It's been a process," Tagovailoa said. “We went to the hospital for medical checks yesterday at 10 in the morning and I was the last person to leave. I got back about 7:49 last night, so right in time for the informal and formal (team) interviews."

It's been a grueling process ever since the man with the multi-million dollar arm injured his hip Nov. 15. Two days later, he had season-ending surgery.

Tagovailoa spent the next three months working his way back, rehearsing answers to all those nagging questions he expected at the league's annual scouting combine.

Here, in Indianapolis, the 6-foot, 217-pound college star is one of roughly 300 draft prospects getting poked and prodded, measured and tested this week.

But the continual queries about his health are a stark reminder how tough the comeback journey has been.

No, he's not quite 100% yet, though it is clear Tagovailoa feels a lot more like himself these days.

Inside the interview room, he stood behind the microphone, smiling repeatedly as he fielded reporters' questions for nearly 30 minutes.

At times, he sounded like a polished pro, even brushing aside a question about how uncomfortable he felt talking about himself.

He explained that he'd been throwing a little, nothing crazy, and that he's been training with former NFL quarterback Trent Dilfer and former NFL head coach and offensive co-ordinator Ken Whisenhunt to prepare for this week.

“I think the quarterback position is the hardest position to play in any sport," Oakland Raiders general manager Mike Mayock said. “There are a hundred things you can point to, but the traits I think you need are leadership, accuracy and pocket awareness. They need to be a leader of men and when you get in the huddle you have to be an alpha male."

There seems to be little doubt Tagavoila possesses those characteristics.

He's been on the radar of NFL scouts since replacing Jalen Hurts in January 2018 and rallying Alabama to a victory over Georgia in the national championship game. He won the starting job that fall, beating out Hurts, then led Alabama back to another title game before losing to Clemson.

His 2018 honours read like a cheat sheet to a college football awards show: Heisman Trophy runner-up; Maxwell Award and Walter Camp player of the year recipient; SEC offensive player of the year; and consensus All-American while setting single-season school records for yards passing (3,966) and TD passes (43).

Tagovailoa was playing well again this season, too, until spraining his right ankle in mid-October. That injury forced him to miss one game but he returned against LSU and then suffered a dislocated and fractured hip in mid-November. Yet he still led the FBS with an efficiency rating of 206.93

“Mentally it's been a grind, but it's not something that's new to me," he said. “I've dealt with a hand injury, my left ankle, my right ankle. So I sort of knew what to expect going through this process, but it's definitely been a grind."

And if Tagovailoa proves he's healthy by draft day, he could be a top-five pick in Las Vegas and an instant millionaire.

He knows it. His family knows it. The scouts know it.

“I’m hoping to do everything. I don’t think there’s much to wait on," Tagovailoa said. “Once March 9 hits, (I hope to be cleared) to go out there, run, drop back, work on a lot of those things again.”