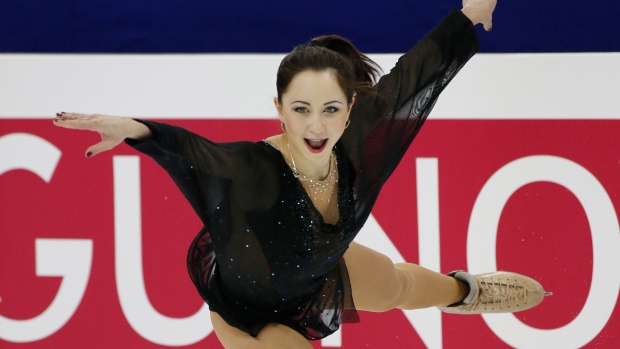 The pair held off two Chinese teams in the free skate to capture gold in the pairs event on Thursday at the world figure skating championships.

After a seventh-place finish at the Sochi Games last year, Duhamel, from Lively, Ont., and Radford, from Balmertown, Ont., decided to continue their careers and skate another year -- and haven't lost since. They've won all six international events they've entered this season, including the Grand Prix Finals and Four Continents.

"Some dreams are so big that you can't even imagine them happening and it's all happening right now," said Radford. "I could never have imagined it and I can't tell if it's a dream or reality.

"We've worked so hard to get here and it's amazing."

Duhamel and Radford, who won bronze at the previous two world championships, were the leaders after the short program. It is Canada's first pairs title since Jamie Sale and David Pelletier won in 2001.

"This is a very personal victory. Every single victory along the way this season had a very special meaning," Duhamel said.

Pang and Tong, who came out of retirement this year to finish their careers in Shanghai, now have six world medals (two gold, one silver, three bronze) to go with their silver medal from the 2010 Vancouver Olympics.

Also, 18-year-old Russian Elizaveta Tuktamysheva landed a triple Axel on her first leap of the figure skating world championships on Thursday, opening up a big lead over the rest of the field after the short program.

"When I landed the triple Axel, I got goosebumps and I thought, 'Is this a dream or did I really just do the triple Axel at the world championships?"' Tuktamysheva said.

Only a handful of women skaters have successfully landed a triple Axel in international competition, among them Tonya Harding, Midori Ito and Mao Asada. Tuktamysheva landed the difficult jump in one of the biggest competitions of her career after only practising it for a couple months.

"It's 50 per cent I could land it and 50 per cent I could miss it, anything could happen with this jump," Tuktamysheva said. "However, I think that figure skating needs to develop and many girls will do the triple Axel in the future. You have to do difficult elements and you cannot stagnate.

"Maybe we will even be doing quad (jumps) in the future, who knows?"

A year after inconsistent results kept her off the Russian team for the Sochi Olympics, Tuktamysheva is having a banner season. She has captured seven titles in nine events, including the European Championships and Grand Prix Finals, and is now closing in on her first world title.

Skating to Maurice Ravel's "Bolero," Tuktamysheva dazzled not just with her jumps -- her footwork was crisp and her spins tight and blisteringly fast.

She scored 77.62 points, the third-highest short program tally since the International Skating Union changed its judging system in 2004. Sixteen-year-old Elena Radionova of Russia was more than eight points behind in second, while Satoko Miyahara of Japan finished third on her 17th birthday.

While the Russians were out in front as expected, the skaters believed to be their biggest challengers, the Americans, faltered.

Both Gracie Gold and Ashley Wagner struggled with their opening triple lutz-triple toeloop combinations. Gold, the bronze medallist in Sochi, took an extra step on her triple lutz and didn't perform the second jump, and three-time U.S. champion Wagner fell on her toeloop.

Gold was in eighth place after the short program, just behind American teammate Polina Edmunds. Wagner was in 11th place.

With files from The Associated Pres