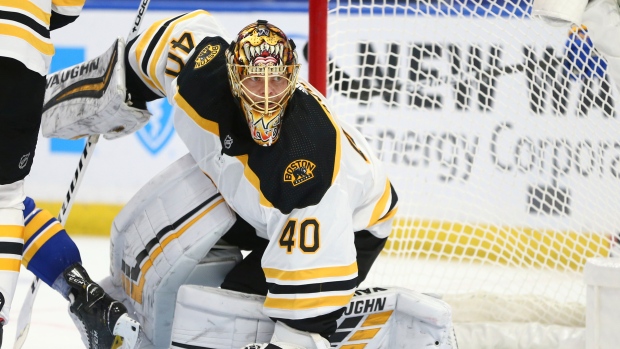 BUFFALO, N.Y. — Tuukka Rask missed 17 games through March and April. He's healthy and well-rested now, and showed the Boston Bruins he can be a difference maker down the stretch.

Rask recorded his first shutout of the season and extended the Bruins winning streak to five games in a 2-0 victory over the Buffalo Sabres on Tuesday night.

Rask made 32 saves, including a highlight-reel save on Sabres rookie Dylan Cozens in the first period that helped give the Bruins their seventh win in nine games.

“It’s just half-skill, half-luck I guess,” Rask said. “It’s kind of desperation more than that at that point when you can’t push over to that side so you just throw anything at the puck you can and hopefully it hits you and today it did.”

Rask has 51 career shutouts and earned this one after making 17 saves in the third period to secure the victory. Rask is 3-0-0 in his last three starts since returning from an upper-body injury on April 15.

“I think he was our best player, it goes without saying,” Bruins coach Bruce Cassidy said. “We expect him to shut the door when need be.”

The Bruins closed out the game killing off 1:33 of a 6-on-3 Sabres power play after penalties 27 seconds apart with 2:34 left to play. Rask only needed to make one save before the Sabres took a penalty for too many men on the ice.

“It was not what we wanted,” Sabres interim head coach Don Granato said. “It was not competitive enough, there was not enough net focus and net drive. So, no question it was disappointing. And we will look at that and it will be easy to learn from that.”

Brad Marchand and Connor Clifton scored for Boston, which held on to fourth place in the Eastern Division.

Marchand opened the scoring at 8:06 of the first period with his 24th goal of the season.

Clifton’s first goal of the season made it 2-0 Boston at 3:03 of the second period.

Dustin Tokarski made 35 saves for Buffalo. In his eight starts with the Sabres this season, he has made 30-or-more in six games.

Although no mention of Minneapolis police officer Derek Chauvin being found guilty in the murder of George Floyd was made before the game at KeyBank Center, Sabres owners Kim and Terry Pegula did share their sentiments via the Sabres and Buffalo Bills Twitter accounts saying, “Today’s verdict brings accountability to the senseless murder of George Floyd, but the fight to end racism and hate in our community continues. There is so much more work to be done.”

Sabres forward Drake Caggiula made his Sabres debut after he was claimed off waivers from the Arizona Coyotes on April 9. Caggiula had to go through quarantine before being allowed to play.

Bruins defenceman Matt Grzelcyk returned to action after he missed the previous five games with an upper-body injury.

The Sabres signed 2019 sixth-round pick Lukas Rousek to a two-year, entry-level contract. The 22-year-old Czech forward posted 14 goals and 38 points in 49 games with Sparta Praha this season, with two goals and five assists in 11 playoff games.

The Bruins and Sabres face off again on Thursday.