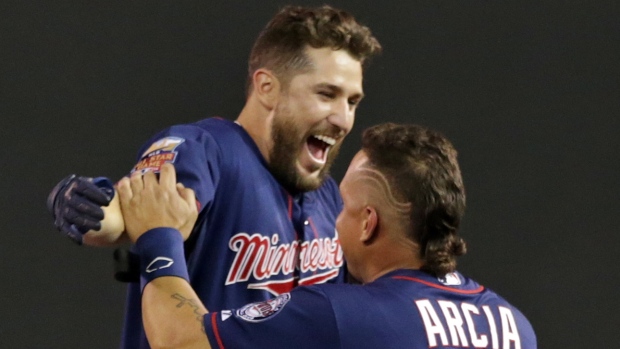 MINNEAPOLIS - After a 13-inning victory the night before, the long-shot Cleveland Indians held out hope that they could still sneak into the playoffs.

They were dealt a serious setback Friday night.

Trevor Plouffe singled in Danny Santana in the 10th inning to give the Minnesota Twins a 5-4, comeback victory over Cleveland, further damaging the Indians' already slim playoff hopes.

"It sucks. You got a lead and you end up losing," said starting pitcher Trevor Bauer, who struck out six in six innings. "We dug ourselves a hole and we're in a tough position. Everything is magnified right now. All these losses, they stink."

Santana led off the ninth with a single off Kyle Crockett (4-1) and advanced to third on Brian Dozier's single to right-centre. Joe Mauer was intentionally walked to load the bases, and Crockett struck out rookie slugger Kennys Vargas, who homered in the game.

"It's not exactly where we want to be, we'd rather be on their side. But we're just trying to continue to play good baseball, not giving up," Plouffe said. "We know we're out of it, but this is the time for a lot of guys to show they can play in a situation like this, against these good teams late in the season, and I think we did a pretty good job."

With Minnesota trailing 4-3 in the ninth, Kurt Suzuki hit a one-out double off closer Cody Allen and was replaced by pinch-runner Eduardo Nunez. Nunez moved to third on Oswaldo Arcia's single and scored to tie it when Aaron Hicks grounded into a fielder's choice.

It was a tough play, but shortstop Jose Ramirez had an outside shot of turning a double play. He ranged over and stabbed his glove at Hicks' grounder, but couldn't reel it in and settled for the force out at second.

"He did what he could with it," Allen said. "It was a well-struck ball and he laid out for it. It was unfortunate the way everything turned out, but it was still a good play."

Jared Burton (3-5) stranded Michael Brantley at second base to end the top of the 10th.

Brantley homered and Lonnie Chisenhall had two hits and an RBI for Cleveland, which entered the night four games out of the final AL wild-card spot.

Oswaldo Arcia homered for Minnesota in the third off Bauer. It was Arcia's fourth homer this season off Bauer.

Josh Tomlin was the eighth reliever by Cleveland, which set an American League record during the game by going to the bullpen 547 times this season.

Detroit and Kansas City sit atop the AL Central and play a three-game series this weekend. Cleveland needs one of those teams to sweep the other, then some help from Oakland and Seattle if they want any chance at sneaking into the playoffs.

TWINS: All-Star closer Glen Perkins has been shut down for the season with a strain and nerve irritation in his left forearm. Twins GM Terry Ryan said Perkins should be ready in plenty of time for spring training after an off-season strengthening and maintenance program.

Ryan said SS Eduardo Escobar should return from a jammed shoulder in the next couple of days.

INDIANS: 2B Jason Kipnis missed the game with a sore right hamstring. Francona said Kipnis could be back for Saturday's game.

OF Ryan Raburn underwent surgery on his left knee Friday to repair a lateral meniscus tear, ending his season. He hit .200 with four homers and 22 RBIs after signing a two-year, $4.85 million contract extension in the off-season.

Twins' rookie Trevor May (3-4, 7.71) will try to win his fourth straight after losing the first four starts of his career.