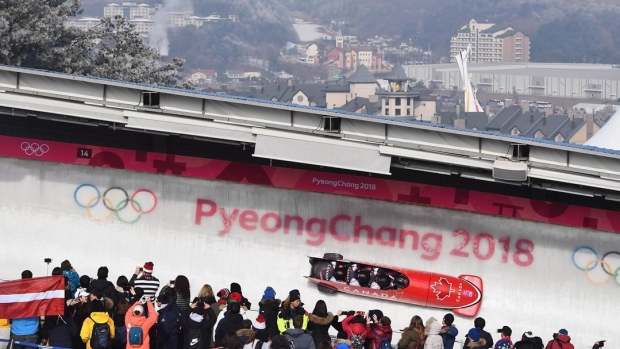 Two-sport Canadian Olympian Seyi Smith is taking his experience in hefty athletic issues and running for a position on the International Olympic Committee's athletes' commission.

All athletes competing in the upcoming Winter Olympics in Beijing will vote to fill two vacancies on the commission, which represents athletes' interests at the IOC table.

Smith, whose first name is pronounced Shay, competed in track and field in the 2012 Summer Games in London, and in bobsled in the 2018 Winter Games in Pyeongchang, South Korea.

Now retired, the 34-year-old from Ottawa is an electrical engineer specializing in renewable technologies. Sustainability is a tenet in his election platform, but Smith feels ready to tackle geopolitical and social issues that impact the IOC and athletes.

When he chaired the Canadian Olympic Committee's athletes' commission from 2017 to 2020, he presided over the divisive question of athlete protests at Olympic Games as the country's athletes tried to decide on a position on it.

"Those were some weighty meetings," Smith recalled. "I would say Rule 50 was a bit weightier because with COVID, everyone was on board. The Rule 50 experience was difficult.

"The process that we took just shows how I operate. I talked to as many people as I could, we had a survey, we had a town hall, and we tried to thread the needle.

"The only thing that I can say helped me sleep at night is that when I was the chair of the COC's AC, I just always tried to be as transparent as possible with my reasoning."

Canadian hockey player Hayley Wickenheiser was elected to the IOC's athletes commission in 2014. Her eight-year term ends with Beijing's Games.

Winner of multiple Olympic gold medals and an active athlete participating in the 2014 Winter Olympics, Wickenheiser had name recognition in the international athlete community that Smith lacks.

Smith, who will be in Beijing as a COC athlete mentor, sought out Wickenheiser's advice.

"Hayley is huge and her name carries a lot of weight, and mine does not carry as much weight. She gave me some suggestions on the groundwork I need to do in the village," Smith said. "She gave me tips on how to be heard and how to make an impact."

Smith was a member of Canada's relay team that finished third in London only to be disqualified from a bronze medal because of a lane infraction.

He was also a brakeman in 2018 for Justin Kripps' four-man bob team that finished sixth, and thus has the advantage of contacts in both the summer and winter athlete community.

Smith already serves on the IOC's Sustainability and Legacy Commission.

"In the last couple of years I've been doing a lot with sport and sustainability," he said. "I'm finding ways I can do more and give back a bit more.

"I realized the IOC AC is really good position I can be in to make substantial change. I know there is a portion of athletes that find this very important. You've got groups like Protect Our Winters and groups like EcoAthletes.

"Whether or not there's a critical mass that aren't already part of it that will find this appealing and will want to get behind it, I don't know and it's partially my job to make it appealing and make it worth everybody's while."