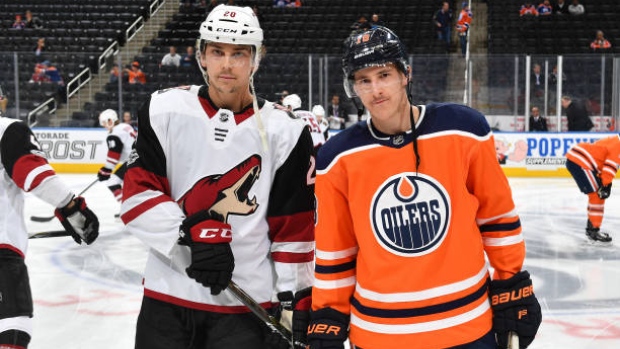 Dylan Strome became the second of his siblings to be moved in an NHL deal this month when he was traded to the Chicago Blackhawks on Sunday night.

The former third-overall pick was dealt along with Brandon Perlini by the Arizona Coyotes, who acquired Nick Schmaltz.

Dylan's older brother, Ryan, was traded just eight days earlier by the Edmonton Oilers to the New York Rangers in a swap for Ryan Spooner.

“My family’s a suitcase,” the elder brother joked to the New York Post on Monday.

Ryan, who's been traded twice in his NHL career, said he little advice to give his younger brother after the move, but told him “just grab whatever you can put in a couple suitcases and go have fun."

"It’s been a weird week for our family, of course. But it’s exciting, we’re both playing for Original Six franchises now," Strome said. "Good opportunities. And it’s part of the business.”

Strome signed a two-year, $6.2 million contract with the Oilers in July and said Monday he was surprised to traded away just five months later. He had one goal and two points in 18 games with the Oilers prior to the trade to New York.

“I just think you’re kind of in shock because you get so comfortable,” Strome said. “I said this when I got traded from the Islanders, you’ve been going to development camps for five, six years. You see the same people, the same trainers, the same little things. That’s probably the weirdest thing. But also the feeling of, ‘Why didn’t it work out there?’

“In the back of your mind, you’re a little disappointed because when you’re on a team, you’re fully committed to that team. And when they move you, you realize you’re just a pawn on the chess board. You have to readjust. You put so much time, effort, thought and dedication into one team and then — there you go, you’re on to another team now.”

Strome has one goal and three points in six games with the Rangers since the trade and noted change can sometimes be for the best.

“If you’re not happy with your current situation, there is always somebody watching you,” Strome said. “A change of scenery is a good thing sometimes.”