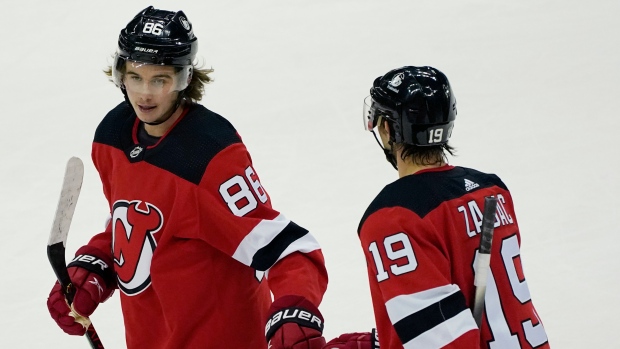 NEWARK, N.J. — Ty Smith set up two first-period goals to become the sixth NHL rookie defenceman to get points in his first five games, leading the New Jersey Devils to an 2-0 victory over the New York Islanders on Sunday night.

Scott Wedgewood, who spent last season in the AHL, made 28 saves for his first NHL shutout since blanking the Devils in December 2017 for Arizona. The win was his first in an NHL game since February 2018.

“I'm proud of myself,” Wedgewood said, noting his biggest thrill of the night was getting the shutout as a birthday present for his mother, Brenda. He has not seen his parents in Toronto since October.

“I mean, they’ve been the biggest supporters I have, and it is good for her,” he said. “I’m sure she’s enjoying it, but haven’t checked my phone yet. But I love them. They’ve been, you know, everything I can ask for and more. So it is enjoyable. And I hope she had a fun night.”

Jack Hughes and Pavel Zajac scored two minutes apart late in the opening period as the Devils split their home-and-home series with the Islanders.

Wedgewood, who signed with the Devils as a free agent in the off-season, has started the last two games for New Jersey. No. 1 goalie Mackenzie Blackwood was placed on the COVID-19 list on Thursday, hours before the Islanders posted a 4-1 win over the Devils.

Wedgewood has come a long way. After leaving the Devils he had stints in Los Angeles, Arizona, Buffalo, Tampa and back with the Devils. He has learned not every save needs to be perfect.

“It’s just it’s made me kind of understand what I do and how I do it and just to use that as your strength,” Wedgewood said. “I think now just kind of taking up more net, presenting myself a little bit bigger and just being a lot more patient.”

Wedgewood was at his best in the first period when he made six saves on the Islanders first power play.

Devils coach Lindy Ruff said he felt great for Wedgewood, who has persevered to get back into the NHL. When he joined the team, Blackwood and Corey Crawford were expected to be the top goalies. Crawford retired during camp and Blackwood tested positive.

“All of a sudden with two goalies gone, he becomes the lead guy,” Ruff said. "I’m extremely happy that he put the work and he had a great camp and he gave us one heck of a game tonight which allowed us to get two points really happy for him.”.

Islanders coach Barry Trotz said his team not only made it too easy on Wedgewood, they didn't get a team effort.

““I just need more,” Trotz said. "We need everybody contributing through our lineup right now. We’re not getting enough from every line. We need a little more finish. Where you break through is by getting to the net a little bit more.”

Rookie Ilya Sorokin made 22 saves in his second career game. He started against the Rangers and the Islanders also were shut out.

“It’s not the way we’d like to welcome him into our first couple of games for him by any means," Islanders forward Anders Lee said of Sorokin. “We owe him quite a bit here and we’ll make sure we get them back. I know he’s going to stand tall for us.”

Hughes, who had seven goals last season after being picked first overall in the 2019 draft, got his third of the season with a power-play goal from the left circle at 17:00. Smith had the primary assist on a play Islanders penalty-killer Cal Clutterbuck broke his stick.

Zacha doubled the margin two minutes later, putting in the rebound of a Nikita Gusev shot past Sorokin. Smith had the second assist.

The last rookie defenceman to score in five straight games to start his career was Cale Makar of Colorado in 2019.

The Devils came into the game struggling on the power play and penalty kill. They were 1 of 11 with the extra man in their first four games and were 1 of 2 against the Islanders. After giving up six goals in 16 short-handed situations, New Jersey was perfect on two kills.

The Devils recalled forward Nick Merkley from the taxi squad and loaned forward Jesper Boqvist to the taxi squad. Merkley played on a line with Gusev and Zacha. He was on the ice for the Zacha goal.

Islanders forward Anthony Beauvillier left the ice in the second period and played only 7:16. Trotz had no update after the game.