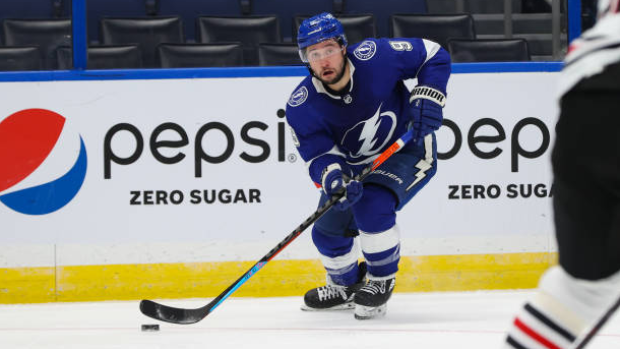 Add Tyler Johnson to the list of players bound for Chicago.

The Blackhawks are acquiring Johnson and a 2023 second-round pick from the Tampa Bay Lightning in exchange for the contract of defenceman Brent Seabrook, it was announced Tuesday evening.

We also acquired a 2023 2nd round pick in the deal, in exchange for the rights to Brent Seabrook. pic.twitter.com/hOHML1ayRy

The deal ends a nine-year run for Johnson in Tampa Bay, culminating in back-to-back Stanley Cup victories in 2020 and 2021.

The 30-year-old scored eight goals and added 14 assists in 55 games for the Bolts during the regular season last year, adding four goals and three assists in 23 Stanley Cup Playoff games.

Johnson has three years remaining on a seven-year, $35 million contract he signed in July of 2017 which carries a cap hit of $5 million.

Seabrook has not played since the 2019-20 season and is eligible to be placed on the long-term injured reserve list. TSN Hockey Insider Pierre LeBrun tweets that Seabrook has agreed to waive his no-move clause in order for the deal to go through.

Brent Seabrook had to agree to waive his NMC for the Chicago-Tampa deal to go through. Which he did. He’s not playing anymore but his contract is still on the books and therefore so is the NMC. Same as when Ryan Callahan agreed to waive NMC when his contract was moved to Ottawa

Earlier in the day, Chicago acquired goaltender Marc-Andre Fleury from the Vegas Golden Knights, although multiple reports indicate Fleury is mulling his future.