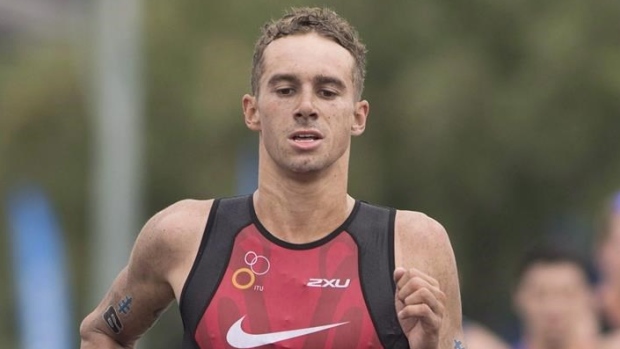 "Everyone has different tricks that they use in the race mentally. Mine is just pure focus (and) micro goals. I've always done it, but maybe I've refined how I've done it," Mislawchuk said Friday.

Mislawchuk will join a field of 57 athletes in the WTS men's elite race Saturday at Hawrelak Park in the Edmonton's river valley.

Mislawchuk, ranked 17th on the elite WTS circuit, is expected to have the crowd behind him, as they were in Montreal on June 29th when they chanted his name as he pushed himself through the rain to capture bronze and become the first Canadian male to climb on to a WTS podium.

"I've (also) kind of learned maybe to empty the tank a bit more," he said. "In Montreal I came off camera and 10 seconds later I was throwing up for 40 minutes.

"I was waiting for the podium and I was at the trash can behind the stage."

He also took ill after breakthrough World Cup wins this year in Australia in March and Mexico in June. For him the goal is conquering not only your opponents but your brain, which constantly wants to take the focus away from the pain to somewhere else, anywhere else — the sky, the crowd, the next segment of the race.

Daydream for a few seconds, he said, and you're suddenly two seconds further behind the pack in a race where 20 seconds separate the top 10 finishers.

"It can slip away so quickly," he said. "All your mind wants to do is just shut off and turn the pain away.

"The mind's telling you to stop and you're just trying to bring it back and say 'No, let's keep going.'"

Mislawchuk's father, Fred, said he has seen a broader attitude adjustment in his son over the last six to eight months.

"It's a big belief in himself," said Fred. "Before it was like racing against his heroes and (he was hoping for) top 10ish. (But now) it's like 'I can go into a race now and I can podium.'"

Mislawhcuk faces an uphill battle, literally and figuratively, on Saturday against a field includes the top five WTS ranked competitors and a long slope out of the valley.

Series leader Vincent Luis of France has made the top six in all his WTS men's elite events this year to go with a gold medal in Yokohama, Japan, and a silver medal in Hamburg, Germany.

Javier Gomez Noya of Spain, ranked second, can make up ground if Luis falters as he is 438 points behind him in the series points race, given that a thousand points are awarded to race winners.

Alexis Lepage of Gatineau, Que., and Victoria's Matthew Sharpe round out the Canadian contingent in the men's elite.

The women's elite race is missing much of its star power. Only two of the top 10 ranked WTS women's triathletes — Americans Taylor Spivey (fourth) and Summer Rappaport (eighth) — will suit up.

Spivey has been in the top six in all her WTS races this year and said it's because she has been improving on her traditional weakness, the running portion, to complement her swimming and cycling.

"Seeing it all come together and being able to perform consistently has been really nice," said Spivey.

Joanna Brown of Carp, Ont., Canada's top female triathlete will not race. Amelie Kretz of Blainville, Que., will start in her first WTS race in the women's elite Saturday.