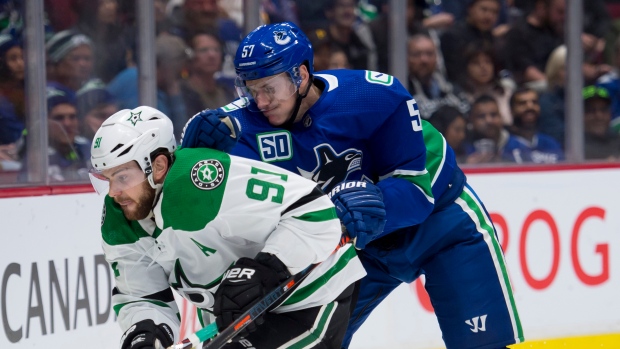 VANCOUVER — Tyler Seguin scored a goal and added an assist as the Dallas Stars defeated the Vancouver Canucks 4-2 Thursday night for their sixth win in seven games.

Justin Dowling, Alexander Radulov and Blake Comeau also scored for Dallas (10-8-2). Joe Pavelski and Miro Heiskanen both added two assists. The Stars, who beat the Flames 3-1 Wednesday night in Calgary, are 6-0-1 in their last seven matches.

Seguin scored on a pretty three-way passing play with 1:49 left in the second period to give Dallas a 3-2 lead after 40 minutes. He carried the puck up the ice, then dropped it to Pavelski, who passed to Heiskanen. He tapped it back to Seguin, who had an open back door for just his second goal in 16 games.

Comeau had put the Stars ahead 2-0 at 4:03 of the second. He skated around Stecher then, falling to the ice, put a backhand under Markstrom’s glove. It was his first goal in six games this year.

Virtanen cut the lead to one at 5:21. He made a drop pass that Tanner Pearson blasted at the goal. Khudobin made the save but gave up a big rebound, which Virtanen put into the gapping net.

Stecher tied the game at 11:30 with a shot from the blueline that changed direction.

Dowling scored the game’s first goal at 3:45 of the opening period. The 29-year-old from Calgary skated between two Canuck defencemen and took a feather pass from Seguin. He then used a toe drag and lifted the puck over Markstrom for his second goal in as many nights.

NOTES: Vancouver played without centres Jay Beagle (lower-body injury) and Brandon Sutter (groin strain). … Tyler Graovac, a callup from the AHL Utica Comets, was inserted into the lineup. … Dallas forward Andrew Cogliano, who left Wednesday’s game with an injury, took the warmup but didn’t play. He was replaced by Rhett Gardner. … Dallas defenceman Roman Polak played his first game since fracturing his sternum in the season’s opening game. … Canuck defenceman Jordie Benn faced his brother and former Stars teammate Jamie Benn. … Actor Bill Murray was in the crowd for a second consecutive game.

This report by The Canadian Press was first published Nov. 14, 2019.