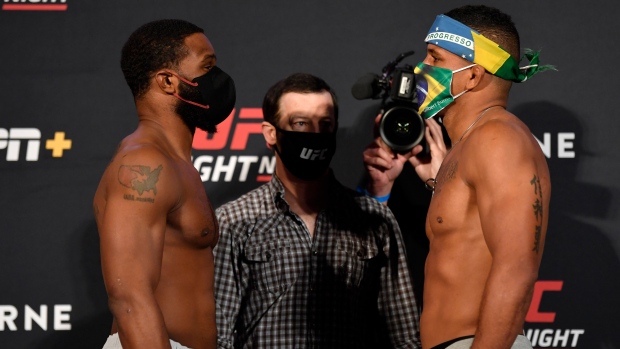 The last time Tyron Woodley was in the UFC Octagon, he lost the welterweight title to Kamaru Usman in a one-sided unanimous decision. Over a year later, the former champion is back to start his climb back to another shot at UFC gold, but in his way will be red-hot Gilbert Burns, riding a five-fight winning streak.

The pair will meet in the main event of Fight Night: Woodley vs. Burns at the UFC Apex on Saturday, the promotion’s own venue in Las Vegas.

Woodley has been scheduled to return twice since his loss at UFC 235 in March of 2019. He was set to face Robbie Lawler, in a rematch of his title-winning victory, at Fight Night Minneapolis in June of 2019, but was forced out of the match due to a hand injury.

He was also going to face Leon Edwards in London, England, on March 21 at an event that was eventually cancelled due to the COVID-19 pandemic.

Before losing the welterweight title to Usman, Woodley retained it in a majority draw with Stephen Thompson and also registered successful defences against Thompson in a rematch, Demian Maia and Darren Till.

Woodley believes the time he has spent fighting top competition in the UFC’s welterweight division gives him the advantage in Saturday’s main event.

"In my opinion, I feel like I’m more experienced, I feel like I’ve been here longer and I feel like I have more tools than Demian Maia had to present for him,” Woodley told TSN. “I don’t think he’s in over his head, but I think there’s levels to it and I’m on a different level.”

Burns has captured his last five fights, earning wins over Olivier Aubin-Mercier, Mike Davis, Alexey Kunchenko, Gunnar Nelson and Demian Maia to build his impressive streak. He has also won three in a row since his return to the welterweight division.

The Brazilian believes that Woodley is overconfident heading into their marquee clash.

"The way I see it, he thinks he’s won the fight already,” Burns told TSN. “He’s talking about how he had a bad night in his mind (against Usman), but it was a very bad night for him in his last fight. I’ve been working hard, I’ve been doing my fights, I’ve been doing my job. I think he’s underestimating me so much that I’m going to shock him. First, second round, he’s going to be like, ‘yo, that guy is going to keep coming. I can’t wait.”

The 33-year-old holds an overall 18-3 career MMA record, including an 11-3 mark since joining the UFC.

In the co-main event, Blagoy Ivanov will meet Augusto Sakai in a heavyweight clash.

Ivanov will be looking to rebound from his split decision loss to Derrick Lewis at UFC 244. He has split his four UFC fights, with wins over Ben Rothwell and Tai Tuivasa.

He dropped his UFC debut to former heavyweight champion Junior dos Santos in July of 2018.

Sakai is riding an overall five-fight winning streak. He earned his place in the UFC with a victory over Marcos Conrado on Dana White's Contender Series Brazil and has beat former heavyweight champion Andrei Arlovski as well as Chase Sherman and Marcin Tybura in the promotion.

He defeated Tiago Cardoso before appearing on Contender Series.

In the featured prelim bout, Katlyn Chookagian will be seeking a measure of revenge of sorts when she meets Antonina Shevchenko.

Chookagian is coming off an unsuccessful flyweight title bout against Shevchenko’s younger sister Valentina at UFC 247.

Prior to that loss, the 31-year-old was on a two-fight winning streak after beating Joanne Calderwood and Jennifer Maia.

Shevchenko earned a win in her last fight against Lucie Pudilova and holds an 8-1 career MMA record.

As with the three previous events the UFC staged in Jacksonville, there will be no fans in attendance on Saturday night.

Here is the entire Fight Night: Woodley vs. Burns card.