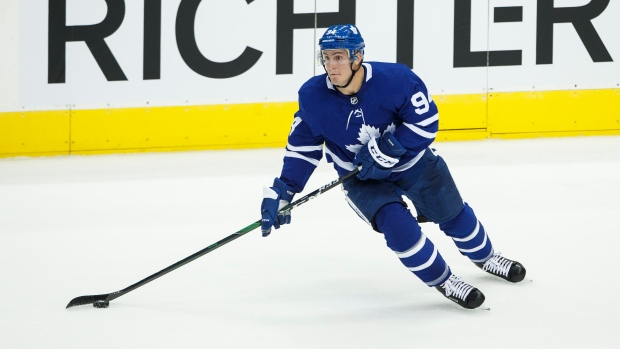 TORONTO – Tyson Barrie isn’t immune to trade speculation buzzing around him ahead of Monday’s NHL trade deadline, but it’s importance pales in comparison for him to what’s on the line Saturday when the Maple Leafs host the Carolina Hurricanes.

“I skyrocketed there to number five on the [TSN] Trade Bait, so [things] happen quick,” Barrie joked after the Leafs’ optional morning skate on Saturday. “But it's nothing I haven't dealt with before. We're focusing here as a group on making the playoffs and there’s a big game here tonight so nothing really changes for me.”

Toronto took hold of third place in the Atlantic Division after Thursday’s dominating 4-0 win over Pittsburgh, but one strong performance is hardly enough to secure the Leafs’ a playoff berth this season. With the Florida Panthers two points back and nipping at their heels, Toronto needs to bottle its urgency through the final 20 regular season games, and Barrie’s hopeful he’ll be around for the duration.

“I love it here, I love the guys,” he said. “We want to try to be a team that does something special this year and I'd obviously like to be around for that. It's out of my control but a big win here tonight would help [our prospects].”

This has been an uneven year overall for Barrie, his first with the Leafs after being traded along with Alex Kerfoot from Colorado on July 1, in exchange for Nazem Kadri and Calle Rosen. Touted as a high-performing offensive defenceman, Barrie struggled out of the gate, failing to score his first goal until 24 games into the season.

After Sheldon Keefe took over from Mike Babcock as head coach in mid-November, Barrie surged briefly with three goals in three games and was moved onto the team’s first power-play unit, but he’s weathered difficulties since with not scoring and his defensive zone play, amassing 33 points (five goals, 28 assists) in 62 games with a minus-seven rating.

Still, the Leafs’ banged up blueline has benefited from having a nine-year veteran like Barrie in its ranks, especially as Morgan Rielly (fractured foot) and Cody Ceci (ankle) are both out at this critical juncture of the year.

“I think he's done very well for us,” Keefe said. “Not just in recent games but I just think there's been a steady progression for him in the time that I've been here in terms of his confidence and his role with the team, his production, all those types of things. I'm really happy with him, he's got good energy, and he's a popular guy in the room.”

Having just been through the turmoil of a trade, albeit it not one that happened mid-season, Barrie said he’ll be more ready for whatever happens in the coming days, but won’t allow that noise to be distracting.

“I guess it's in the back of your mind, but once I get to the rink tonight it'll be routine as usual and just a hockey game so I don't think it'll affect that too much,” he said. “In the past I've been in TradeCentre coming up to the deadline and nothing ever really happened and then when you're least expecting it, you get traded so it's such an unpredictable business. You just try to control what you can control so if anything did happen I'm sure I'd be a little more prepared but still my focus is here with the Leafs.”

His teammates have come to expect nothing less of a Barrie, a newcomer that immediately had an impact off the ice.

“He's a guy that keeps things light,” said Auston Matthews. “He’s [someone that we’ve] all enjoyed having in the locker room, a guy I spend a lot of time with on the road and at home so it's been great getting to know him and building a relationship. And when it comes to game time he takes it seriously when he's out there. Offensively, he's extremely gifted and makes those plays.”

With so much riding on every game for Toronto in the hunt for a comfortable playoff position, Keefe is keeping the deadline in perspective while preparing his group to face the Hurricanes. Having skated in 125 NHL games himself as a player, Keefe is aware how stressful the lead-up to Monday can be, although it wasn’t necessary that way for him.

“My only memory [of the deadline] is nobody would ever want me, so I wasn't too concerned about it,” he joked. “We're not talking about it. I know that it's out there but we're just going about our business here and we've got a lot of pros in the room that have been through this a lot. It is a time of year when everybody in the league is going through in to a certain degree. Just have to keep the focus on what we need to do on the ice.”