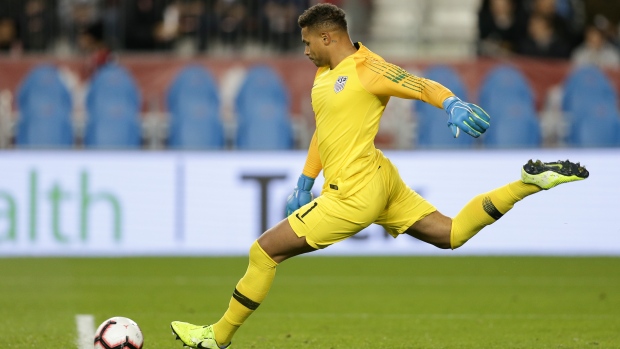 BERLIN — Americans Zack Steffen and Tyler Adams are among the Bundesliga players who expressed solidarity in the wake of George Floyd’s death.

Steffen issued a statement Tuesday titled “Enough is enough.” Steffen said he was honouring “Floyd, Breonna Taylor, Ahmaud Arbery and every other African American who has been killed by police brutality.”

The 25-year-old Fortuna Düsseldorf goalkeeper spoke of his pride in wearing the U.S. national team jersey but questioned why its leaders “won’t protect its citizens who look like me?”

Steffen, a Pennsylvanian who has been sidelined since December because of a knee injury, posted a statement on Twitter.

Trump was criticized by some after police under federal command and National Guard soldiers forced back peaceful demonstrators near the White House with tear gas so he could walk to a nearby church and pose with a Bible.

Adams, a New Yorker who plays for Leipzig, posted a picture of the boots he wore during Monday’s game at Cologne, showing he had “Black Lives Matter” written on his left shoe and “Justice 4 George” on the right.

“As an African American who day in and day out is proud to represent America in the worlds game, I’m saddened and frustrated," Adams wrote. "Collectively our voices will bring justice for these crimes. Enough is enough. Black lives Matter. Black lives inspire. Justice for Floyd. Forever one nation, one team. On and off the field.”

Adams followed by posting an image only in black on Tuesday with the hashtag “blackouttuesday.”

Adams came on in the 59th minute of Leipzig’s 4-2 win, a game in which Cologne’s Anthony Modeste made a gesture against racism after scoring. The French striker stood briefly with his right palm facing out and his left palm facing in to display the darker skin on the back of his hand.

There were previous gestures on Saturday from Schalke midfielder Weston McKennie, and on Sunday from Borussia Mönchengladbach forward Marcus Thuram and Borussia Dortmund teammates Jadon Sancho and Achraf Hakimi.

German soccer federation president Fritz Keller praised the four young players for taking a stand and displaying their solidarity with Floyd, a black man who died on May 25 after a white Minneapolis police officer pressed his knee for several minutes on his neck even after he stopped moving.

While the federation said it would be forced to consider whether the protests on the field broke rules against making political statements, FIFA President President Gianni Infantino issued his own statement Tuesday saying the Bundesliga players “deserve an applause and not a punishment.”