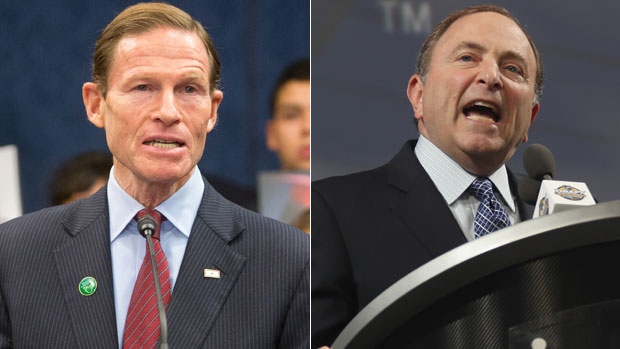 A senior U.S. senator has condemned the NHL for showing “an ongoing indifference and disregard” for scientific evidence linking repeated brain injuries to chronic traumatic encephalopathy, or CTE, a brain-withering disease linked to Alzheimer’s.

“The NHL insists that player safety is sacrosanct – a ‘top priority’ for the league – and recognizes the many dangers of concussions and head impacts,” Sen. Richard Blumenthal wrote in an Aug. 15 letter to NHL Commissioner Gary Bettman. “But the league appears unwilling to consider even the possibility that concussions cause CTE.”

“Why does the NHL so readily and quickly discount or dismiss warning signs of a link between hockey and CTE?” Blumenthal continued. “Even a cursory analysis of several medical journals should sound an alarm.”

Blumenthal, a Democrat from Connecticut who is the ranking member of the Senate’s Consumer Protection subcommittee, urged the NHL to establish a foundation to fund independent research about head trauma and brain disease.

Rick Westhead joins Hustler & Lawless to discuss Gary Bettman’s response to a US senator about the possible link between CTE and playing hockey, and how that could impact the ongoing concussions lawsuit.

Blumenthal also reminded Bettman that the NHL is a $4-billion business and that, “much of that revenue is made possible by exemptions from federal antitrust laws, and local and state support.”

Blumenthal’s back-and-forth with Bettman comes as the league battles a high-stakes concussion lawsuit filed in U.S. federal court in Minnesota by more than 120 former NHL players. The former players charge the NHL has put profits ahead of player safety.

While Blumenthal's public spat with Bettman is embarrassing for the NHL, several U.S. political science professors and antitrust experts had mixed opinions about whether the politician is grandstanding or if his veiled threat about the league’s antitrust exemption is one he would pursue.

"Senator Blumenthal's threat is real," said Michael Carrier, a law professor at Rutgers University in New Jersey who is an expert on antitrust legislation. "It seems likely that Blumenthal will keep his position after the (November presidential) election. But this could be a bipartisan issue as I could see Republicans taking a similar position. Everyone is unhappy with head injuries."

George Hay, a professor of antitrust law at Cornell University, said Blumenthal’s claim that NHL revenues are based on the league's antitrust exemption is "pretty far-fetched."

"The likelihood of Congress eliminating the labour union immunity is pretty close to zero," Hay said. "The senator can try to hold a hearing and can probably one way or another force NHL to have some representative appear to discuss concussions, but the antitrust issue is unlikely to have any legs."

In June, Blumenthal wrote to Bettman asking about the NHL’s stance regarding player head injuries and long-term brain damage, arguing that the deaths of six former players, Derek Boogaard, Reg Fleming, Bob Probert, Rick Martin, Steve Montador and Larry Zeidel offer evidence about the risks of long-term brain injuries from playing hockey. Each of those players was diagnosed with CTE post mortem.

In his July letter of response, Bettman wrote that the link between concussions and CTE "remains nascent" and that the press is confused about the subject.

"The confusion in the press about CTE - no doubt further fueled by plaintiffs' counsel in the NHL litigation - relates to the simple and incontrovertible fact that none of the brain studies conducted to date can, as a matter of accepted scientific methodology, prove anything about causation, a primary subject of your letter," Bettman wrote in the response.

It’s unclear whether Bettman’s views represent those of all 30 NHL team owners.

Blumental wrote in his Aug. 15 letter that the NHL "would prefer that athletes remain ignorant of potentially very serious threats to their health."

“Most puzzling is why you attack others for asking these profoundly important questions,” Blumenthal wrote. “Instead of aggressively seeking to advance the science surrounding concussions, you accuse the ‘media’, ‘media consultants’, lawyers and players of ‘fear mongering’. Your letter suggests that seeking facts about concussions and CTE could instill ‘unwarranted fears’ that lead to ‘depression’ and 'suicide.' ”

The NHL leads by its example, Blumenthal wrote.

“Your leadership guides professional players who are admired and revered by junior, college, amateur and youth hockey players,” Blumenthal wrote. “Your failure to take a safety issue seriously could have ramifications for players at every level, seriously affecting public health….The NHL has a duty to behave responsibly in light of its public trust.”