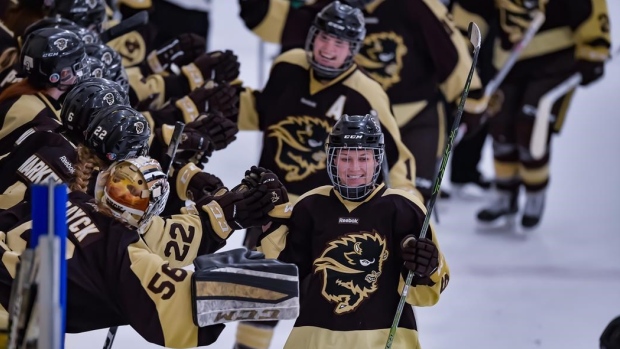 A university women's hockey pilot project testing whether enhanced financial scholarships could stem the flow of athletic talent to the NCAA is ending without a definitive answer.

What started in 2014 as a five-year experiment with potential ramifications for other Canadian university sports was extended in 2019 because of a lack of rigour in reporting data.

A committee tasked with fixing the project was working to insert key performance indicators into it when U Sports membership voted this year to shut it down after the 2022-23 season.

An enhanced financial award (AFA) influenced Audrey-Anne Veillette's decision to pass on a full scholarship to Clarkson and play for the University of Montreal instead.

The quality of the university and the Carabins, as well as proximity to the 20-year-old's hometown of Drummondville, were other factors as well.

So when Veillette says an enhanced AFA "played a huge role. I'm sure how much exactly", it reflects U Sports' difficulty in measuring its impact.

Pilot project proponents admit it's difficult to pin the decrease entirely on enhanced AFAs when a myriad of factors go into a young woman's choice of school.

With just one more year to use enhanced AFAs as a recruiting tool, some coaches wanted more time for a beefed-up pilot project to produce more definitive results.

"Early on, when it began, I don't think there was enough preparation and thought put into how to really make the most of the opportunity. We treaded water for quite a few years without the right type of know-how to promote it, to even educate people that this was out there.

"As a member of a committee that put a lot of hours into dissecting how to move forward, how to evaluate, I'm really disappointed with how the project has come to a close."

Participation was voluntary. Teams had to remain under a cap, so it didn't cost more money.

Women's hockey coaches had the flexibility under that cap to offer a player a package covering tuition, fees and room and board, approximating the "full-ride" of an NCAA Division 1 school.

A report by MacLeans.ca in 2018 estimated the average annual cost of attending a Canadian university for students who don't live at home to be $19,500.

OUA member schools voted overwhelmingly to mothball the women's hockey pilot project even though 178 of the 293 women in the NCAA — 60 per cent — hail from Ontario.

Canada West and Quebec's RSEQ were more active in the pilot project than the Ontario and Atlantic conferences.

"In RSEQ, it did work," University of Montreal head coach Isabelle LeClaire said. "The first thing it did was attract more attention to our program. It gave us credibility. It put us on the same level to have discussions with those athletes.

"The biggest misconception in speaking to coaches across the country, and athletic director at some of those schools, (they) believe this program cost us more money. I was never given a penny more.

"It's like a salary cap. We have 14 units we can give. It's just I can manage it the way I want. If I want to give two to an athlete that's deserving, then I have 12 left."

A "full ride" under the pilot project was rare.

Instead of recruiting a national-calibre player bound for the NCAA, some coaches used their freedom under the cap to spread a little more money between recruits who might have stayed in Canada anyway.

University of Regina head coach Sarah Hodges used a "full ride" once in the eight years of the project to successfully recruit a player otherwise bound for an NCAA Division 1 school.

The player has since graduated and plays professionally in Sweden.

"Our package was basically full for five years," said Hodges, who felt continuing the project would have been useful if changes were made to it.

"I think if you're going to use it, it should be a full scholarship rather than nickel and diming," she said. "That's what it was meant to do so we can compete with the U.S. schools, not necessarily each other."

Canada's under-22 team, known as the national development team, remains dominated by NCAA players. Twenty of 22 women on the 2014 squad were Division 1 players.

Just over 80 per cent of invitees to the team's summer camp this year were D1 players.

Among criteria the committee wanted to insert into the pilot project was the requirement that only players identified by the provincial hockey association's under-18 program as a top-40 athlete, or players invited to a Hockey Canada camp in any age group, could be offered enhanced AFAs.

"We never had a chance to put those KPI into place after working about 15 months on it," said former Canadian Olympic team coach Danièle Sauvageau, who headed the committee.

An initiative started by U Sports chief executive officer Pierre Lafontaine was inherited by successor Graham Brown and then interim CEO Dick White.

A 2019 report by McLaren Global Sport Solutions said the pilot project "has become a divisive subject due in large part to the ineffective construct of the original program, invalid performance measures in some instances, and failure to provide annual key performance indicators (KPIs).

"Given these facts, the level of skepticism and mistrust amongst some members is both warranted and understandable."

White said there wasn't enough support this year among the 56 member schools to extend the pilot project longer.

"It's been a very hard issue. I'm not a women's hockey hater," White said.

"No matter who I talked to, and especially within our board of directors, it was 'after eight years, we should know whether this is working or not and it should be obvious.'

Whether U Sports schools want an answer to the question "how do we stem the flow of athletic talent to the NCAA?" is unclear.

"For some universities, that is definitely a concern. For others, quite frankly, I don't believe it is," White said.

"Some would say we focus on that too much rather than talking about the great programs we have and the people that play in our programs.

"There's polarization across the country on that question."

This report by The Canadian Press was first published Tuesday, Sept. 28.