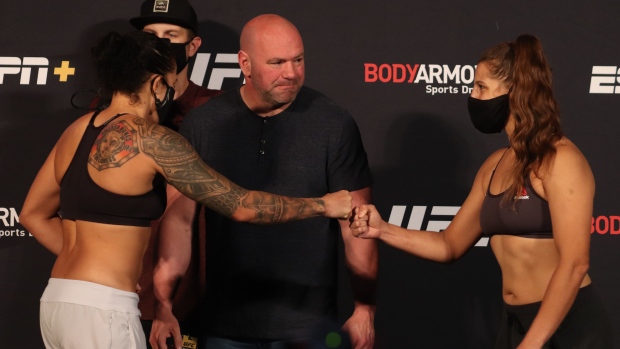 A clinical performance from Nunes, as she beats Spencer via a Unanimous Decision, click here for a full recap of UFC 250.

Through three rounds it has been all Nunes.

Leading up to this fight, Felicia Spencer said she wanted to capitalize on Nunes making a mistake.

The problem with that strategy so far is that Nunes hasn't made any.

After the first round TSN's Aaron Bronsteter has it 10-9 for Nunes.

Garbrandt does it at the buzzer! Just before time expires on the second round, Garbrandt lands a massive knockout shot to win the fight.

AT THE HORN 🚨 @Cody_Nolove beat the buzzer with his KO at #UFC250 pic.twitter.com/DJC88ISmZ2

The co-headliner is next and it's a big one at bantamweight with Raphael Assuncao taking on Cody Garbrandt.

The #UFC250 co-headliner is next and it's a big one at bantamweight with @RaphaAssuncao is set to welcome former champ Cody Garbrandt (@Cody_Nolove) back to the octagon.

THAT WAS FAST! Sterling chokes out Cory Sandhagen in the first round.

STATEMENT WIN: Aljamain Sterling gets under the chin of Cory Sandhagen and puts him to sleep in the 1st round!

Sterling enters the fight having won his last four fights, while Sandhagen is 5-0 in his last five fights. Something has to give.

Only three fights remain as Aljamain Sterling and Cory Sandhagen will battle it out in Bantamweight action.

TSN's Aaron Bronsteter believes that the Rocco Martin and Magny fight was closer than the judges scorecards showed.

Closer fight than the scorecards indicated

Rocco Martin gets the job done, as the fight goes the distance and he picks up a the win via Unanimous Decision.

Neil Magny and Anthony Rocco Martin step into the octagon next in Welterweight action.

O'Malley connects with Eddie Wineland's chin for the immediate knockout.

The first fight of the Main Card will see Sean O'Malley take on Eddie Wineland in Bantamweight action .

Ready for another taste of the Suga Show!?

Now that the Prelims are behind us it is time for the Main Card.

The fight went the distance, but Caceres pulled through picking up the win via unanimous decision.

UNANIMOUS DECISION: Alex Caceres controls the fight from start to finish and doesn't let Chase Hooper get anything going on the ground to secure the victory.#UFC250

Caceres lands a massive right hand early to set the tone of the fight.

🥋 @BruceLeeroyGlow is showing his advantage with the hands early. #UFC250 pic.twitter.com/IMhKyN63SU

The feature prelim is about to get started, Aleksei Caceres takes on Chase Hooper in featherweight action.

Heinisch wastes no time, picking up a first-round KO.

According to TSN's Aaron Bronsteter, it's the first time that he has won as a favourite in the UFC. Entering this fight he was 0-2 as a favourite and 2-0 as an underdog.

Next up we have a middleweight fight featuring Ian Heinisch vs. Gerald Meerschaert.

Next on the UFC 250 card is a middleweight fight featuring Ian Heinisch vs Gerald Meerschaert.

22 of Meerschaert's 30 career MMA wins have come by submission, while Heinisch has 7 wins by decision among his 13 career victories. pic.twitter.com/veaD3Ddm2C

An emotional Stamann picks up the win via unanimous decision.

Fighting with a heavy heart after recently losing his brother unexpectedly, Cody Stamann breaks down following a victory over Brian Kelleher.#UFC250 pic.twitter.com/cbcuHQlzkj

For the second time in 24 days, Brian Kelleher steps into the octagon, this time he takes on Cody Stamann.

Cody Stamann takes on Brian Kelleher in a featherweight bout in the next fight on the UFC 250 card.

Pitolo gets the job done with a second-round TKO.

With the Early Prelims wrapped up, it's time for Charles Boyd and Maki Pitolo to kickoff the Prelim action.

The @ESPN prelims get started in moments. #UFC250 pic.twitter.com/Cl3JXco0ix

Perez only needs one round as he KO's Formiga. Perez has now won three straight fights and is 11-1 in his last 12 bouts.

Alex Perez is the 11th different fighter in UFC history to win via finish by leg kicks.

Perez has now won 3 straight fights and is 11-1 in his last 12 bouts (including 6-1 in UFC in that span). pic.twitter.com/dVNpV6lCIj

The final fight of the Early Prelims is Jussier Formiga and Alex Perez.

Who's getting their hand raised when the dust settles? #UFC250

The second fight of the night was a thriller that went the distance with Clark picking up the unanimous decision over Menifield.

Up Next, Alonzo Menifield takes on Devin Clark in Light Heavyweight action.

Next up! 💪@AlonzoMenifield & @BrownBearC look to keep the fast pace going on @UFCFightPass! #UFC250 pic.twitter.com/0KHp4hzGRi

Herbert Burns has opened up the night by making Evan Dunham tap-out just 1:20 into the fight.

🇧🇷 @HerbertBurnsMMA is not here to mess around!

Our first PPV at home! 🤩

📺 We are live in minutes on @UFCFightPass. #UFC250 pic.twitter.com/ze5egCslUx