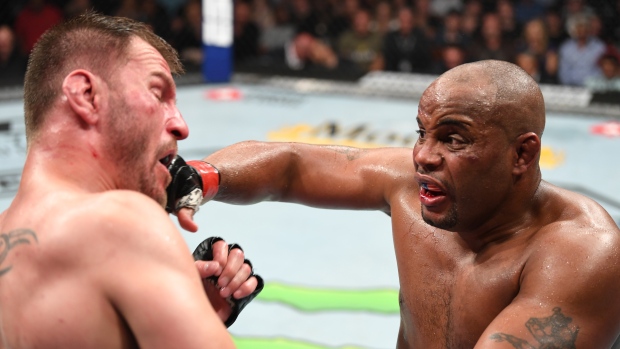 Leading up to UFC 231, Daniel Cormier acknowledged that facing Stipe Miocic in a rematch for the UFC heavyweight title was a high risk proposition.

With the knowledge that topping his first performance was a monumental task, Cormier did his best to put Miocic away during the first two rounds where he found success in striking exchanges.

However, the tide turned sometime in the third round when Miocic started to press the action and Cormier began to tire.

After a plethora of left hooks to the body by Miocic in the fourth round, he was able to score the finish and regain the heavyweight title.

In the aftermath of the event, Cormier told ESPN’s Brett Okamoto that he did not want to make an emotional decision about his fighting future.

Cormier also mentioned that a trilogy fight with Miocic would likely be his next bout should he decide to return.

Cormier told Okamoto that the plan going forward is to meet with his teammates, coaches and their spouses in a few weeks to have a conversation about the future when the emotion after the loss dissipates.

After a nearly three year hiatus, Nate Diaz showed that he has not missed a beat.

Despite taking a few minutes to get fully reacquainted with being in the octagon, Diaz had answers for everything that his opponent Anthony Pettis threw at him.

Diaz was unquestionably UFC 241’s biggest star and after scoring the win, he was quick to call out Jorge Masvidal, a big star in his own right after his record setting five second knockout win over Ben Askren one month prior.

Earlier in the week, Masvidal said that he would accept a fight with Diaz without hesitation and just like that, the UFC has a massive fight on their hands.

With two big events on the horizon in New York this November and Las Vegas in December, this fight has the potential to be a blockbuster matchup.

Sandhagen feels he is the best bet to defeat Cejudo

One of the rising stars in the bantamweight division is Cory Sandhagen and he continued his ascent with a unanimous decision victory over Rafael Assuncao at UFC 241.

Cool and collected outside of the cage and a risk-taking pressure fighter in the cage, Sandhagen isn't shy about his title aspirations.

“I’ll take the belt whenever the UFC is ready to give it to me,” Sandhagen told TSN after the biggest win of his career.

Sandhagen also told TSN that he was the most suited of any fighter in the division to defeat current champion Henry Cejudo.

The Fight of the Night bonuses went to Paulo Costa and Yoel Romero for their frenetic three round bout that likely made Costa the next middleweight title contender.

The Performance of the Night bonuses went to Miocic and newcomer Khama Worthy, who scored a first round knockout over Devonte Smith as the biggest underdog on the card, taking the fight on less than a week’s notice.

Amanda Nunes will have her third title fight in a calendar year.

According to Brett Okamoto of ESPN, Nunes will defend her bantamweight title against former featherweight champion Germaine de Randamie in a rematch that is five years in the making.

Nunes scored a first round knockout over de Randamie in their first bout, but de Randamie has not lost since, winning the featherweight title along the way with a win over Holly Holm at UFC 208.

After relinquishing the title, de Randamie moved back to her natural weight class and after a recent knockout win over then undefeated prospect Aspen Ladd in less than a minute, established herself as the top contender in the division.

Nunes, who only has one UFC loss to recently released Cat Zingano, will attempt to continue to build upon her resume as the greatest female fighter in UFC history.