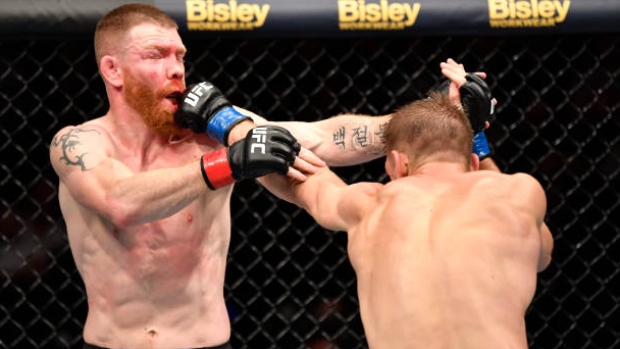 After five very close rounds of high output striking that saw 451 significant strike attempts combined, it was Hooker that earned a split decision (49-48, 48-49, 49-48) over Felder.

Following the bout, Felder told Dan Hardy in his post-fight speech that he is contemplating retiring to spend more time with his four-year-old daughter.

Felder is also a colour analyst for the UFC and devotes much of his time to his broadcasting career in addition to his athletic career.

Hooker called for a bout with Justin Gaethje following the win and will likely be in the lightweight division’s top-5 next week.

Hill has sixth fight in a calendar year

Angela Hill accepted a fight on short notice against Loma Lookboonmee just 29 days after her win over Hannah Cifers and tied a record for the most bouts in a calendar year with six.

Not only did Hill take the fight on short notice, she scored the win via unanimous decision and extended her win streak to three.

“I think the fast turnaround keeps me out of my head. It keeps me focused on what’s next and not the past,” Hill said in a media release that was distributed following her win. “I’ve had a lot of ups and downs in my career. Sometimes that weighs heavy on me in the Octagon. Putting that behind me, I feel like I’ve emerged as a new fighter.”

Hill is 4-2 in the six bouts that she competed in over the course of 12 months.

UFC Fight Night at Spark Arena in Auckland drew a sold out crowd of 10,025 attendees with a $1,239,625 (US dollars) gate. The event set a record for the highest gate and attendance for any sporting event in Spark Arena history.

The Performance of the Night bonuses were awarded to Jimmy Crute and Priscila Cachoeira, who both scored first round finishes in their respective bouts.

The Fight of the Night bonus went to Hooker and Felder for their incredibly competitive main event.

After a short-lived foray into the light heavyweight division that resulted in being knocked out by Dominick Reyes in the first round of their main event fight, Chris Weidman is heading back to the middleweight division, where he previously earned the championship title.

Weidman will face Jack Hermansson in the main event of UFC Fight Night in Oklahoma City on May 2.

Weidman has lost five of his last six fights after starting his career at 13-0, which included back-to-back wins over Anderson Silva.

Hermansson had a four-fight win streak snapped in September when he was defeated by Jared Cannonier.