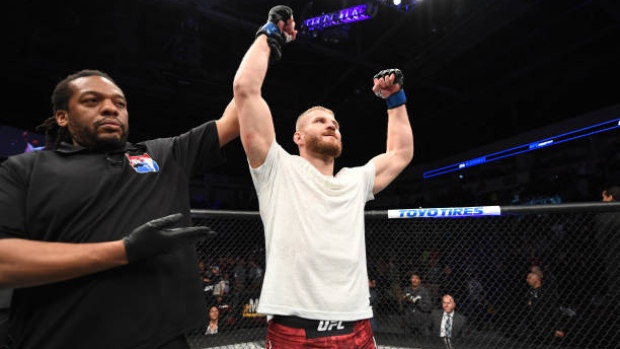 It was Blachowicz who rose to the occasion, landing a vicious counter that knocked out Anderson in the first round.

After the knockout, Blachowicz immediately stared down the champion Jones, a resident of New Mexico and called for the next chance to face the greatest fighter to ever compete in the division.

Blachowicz has won seven of his last eight bouts and the only thing standing in his way of a title shot is a potential rematch between Jones and Reyes given the controversy surrounding the decision.

Should Blachowicz earn the title shot, he would be the first male fighter from Poland to compete for a UFC championship.

Pereira’s antics catch up with him in co-main event

Following his UFC debut, Brazilian welterweight Michel Pereira told TSN that his priority was to put on a show for the fans and bring the entertainment element into his matchups.

Pereira danced on his way to the cage, threw an array of flying knees, did a moonsault on his grounded opponent and landed a showtime kick against his opponent Diego Sanchez.

After throwing caution to the wind for two rounds and winning both of them, Pereira continued to fight recklessly in the third and in doing so, landed an illegal knee to the head of a grounded Sanchez, cutting him in the process.

Referee Jason Herzog gave Sanchez the option to continue, but Sanchez said that he was having vision issues and did not want to finish the third round.

As a result, Sanchez earned a disqualification victory over Pereira.

Since his incredible debut against Danny Roberts last May in Rochester, New York, Pereira has gone 0-2 with losses to Sanchez and Canadian Tristan Connelly.

Ray Borg has become synonymous with missing weight over the past few years and that trend continued as Borg failed to make the flyweight cutoff in his return to the division.

Borg weighed in at 128.0 lbs., two pounds above the 126 pound cutoff and it was the third time that he missed weight in his last six fights.

Despite missing weight, his opponent Rogerio Bontorin accepted the fight at a catchweight and Borg forfeited 30% of his purse to his opponent.

Borg was able to control the bout against Bontorin and completely neutralize him over three rounds en route to an easy unanimous victory win.

Per Andrew Davis of ESPN, Borg is now 3-1 in bouts where he has missed weight.

In a social media post last April, Borg had vowed to retire if he ever missed weight again.

The Performance of the Night bonuses were awarded to Blachowicz for his first round knockout and Daniel Rodriguez, who accepted a bout with Tim Means on short notice and defeated him by second round submission.

The Fight of the Night bonus went to Jim Miller and Scott Holtzman for their back-and-forth three round fight.

Werdum to return at UFC 250

After being handed a two year suspension in 2018, former UFC heavyweight champion Fabricio Werdum has been out of action for awhile.

However, due to providing the United States Anti-doping Agency (USADA) with “substantial assistance”, Werdum’s suspension was reduced to 10 months, making him eligible to compete in April.

Werdum had withdrawn from the USADA testing pool for a time during his suspension, which put his eligibility on hold until he re-enrolled.

Brazilian outlet Combate reported that Werdum’s return would come at UFC 250, which takes place on May 9 in Sao Paulo and that he would face Aleksey Oleynik.

The bout will feature two of the most decorated heavyweight submission artists in mixed martial arts history, both of whom are now 42 years of age.

Oleynik snapped a two-fight losing streak last month when he defeated Maurice Greene at UFC 246, while Werdum’s last bout was a loss to Alexander Volkov on March 17, 2018.