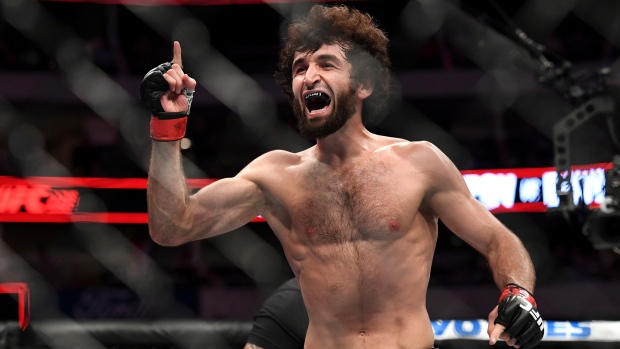 Zabit Magomedsharipov continues to show that he is one to watch in the featherweight division.

Despite Kattar giving everything that he had in the third round, Magomedsharipov was able to survive after landing a late takedown, which allowed the fight to go the distance in the main event of UFC Fight Night in Moscow.

Having won the first two rounds decidedly, Magomedsharipov earned a unanimous decision with a score of 29-28 on all of the judges’ scorecards.

Following the win, Magomedsharipov expressed interest in facing the winner of next month’s featherweight championship bout between Max Holloway and Alexander Volkanovski.

This fight was originally scheduled to take place in Kattar’s hometown of Boston weeks ago, but was rescheduled to Magomedsharipov’s home country of Russia due to him being sidelined with a staph infection.

Alexander Volkov showed that there are, indeed, levels to mixed martial arts when he faced former NFL player Greg Hardy in the co-main event of UFC Fight Night in Moscow.

Hardy appeared to suffer a right hand injury in the first round and without the ability to utilize his best weapon – his powerful right hand – Volkov was able to pick him apart with volume and accuracy.

Despite the loss, Hardy showed that he could last 15 minutes with one of the best heavyweights in the UFC and not look out of place.

With the win, Volkov improved to 5-1 in the UFC, while Hardy fell to 2-2 with a no contest.

UFC Fight Night at CSKA Arena in Moscow had 11,305 attendees for an undisclosed gate.

Performance of the Night bonuses were awarded to Magomed Ankalaev for his incredible front kick knockout win over Dalcha Lungiambula, David Zawada, who earned a submission win over Abubakar Nurmagomedov, the cousin of lightweight champion Khabib Nurmagomedov.

The Fight of the Night bonus went to Magomedsharipov and Kattar for their spirited main event.

During a question and answer availability, Khabib Nurmagomedov shared some interesting thoughts with those in attendance.

The UFC lightweight champion said that he expects to fight in either March or April and said that unless he was issued an apology from the Nevada State Athletic Commission for suspending him in the aftermath of UFC 229, he would be competing in New York in April.

An animated Nurmagomedov also stated the parameters for Conor McGregor earning a rematch with him, which was that McGregor would need to win 10 straight fights.

Nurmagomedov is expected to face Tony Ferguson in his next title defence.

Boxer Fury trains MMA with Till

Fury has expressed interest in trying his hand at mixed martial arts in recent weeks and this is the first tangible evidence that he is being serious.

UFC President Dana White was confused about Fury’s claim that he wants to compete in mixed martial arts and wondered why Fury, who is at the top of the boxing world, would want to take the risk.

“He’s an incredible fighter, and promoted the right way, could be a part of three or four of the biggest fights in heavyweight history,” White told TMZ. “Why come over here and get smashed?”