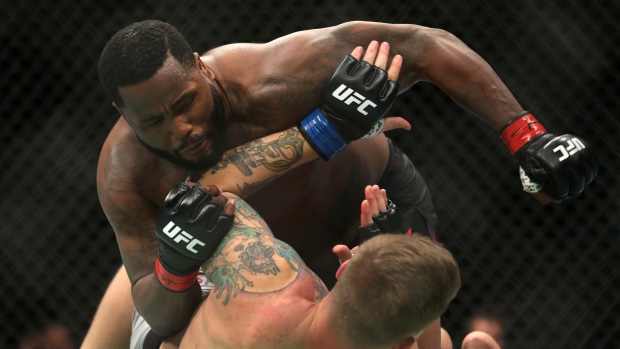 Heavyweight Justin Willis has been released from the UFC, a company official confirmed on Friday.

Willis was undefeated in the promotion and ranked in the division’s top 10 up until his March loss to Curtis Blaydes in Nashville.

Willis’ name mysteriously disappeared from the UFC rankings two weeks ago, raising questions about his status with the company. His manager, Abe Kawa, didn’t immediately respond to a request for comment on Friday.

According to a source, Willis turned down a bout against Walt Harris on July 20 in San Antonio because he was unsure he would be able to make the 266-pound heavyweight limit by that date.

“He had a chance to fight me on July 20, they offered him the contract and he told them he couldn’t make weight in two months,” Harris told Adam Hunter on the MMA Roasted Podcast. “And so they cut him. He’s a coward. He’s all talk, no game.”

Harris told TSN on Friday that he wasn’t impressed with Willis’ supposed inability to make the heavyweight cutoff in roughly two months.

“If he couldn’t make weight in two months, he’s got to be walking around now at close to 350 pounds. If that’s the case, it’s not healthy at all,” Harris said. “We’re supposed to be the toughest guys on earth, so turning down fights in my opinion is never an option.”

Despite competing in the UFC’s heaviest weight class, the weight cut is not an easy one for Willis.

He was forced to withdraw from his bout against Marcin Tybura the day before UFC 208 in February of 2017 due to complications involving his weight cut.

“I did everything I could to make weight for the fight this weekend but due to the short notice my body shut down during the weight cut and the UFC doctors wouldn't clear me to fight,” Willis posted that day on Facebook.

Willis was ranked in the division’s top 15 at the time of his release after accruing a 4-1 record during his time in the UFC.

Blaydes told ESPN’s Ariel Helwani that Willis had acted unprofessionally the week before their fight in March. Blaydes claimed Willis was taunting his father and that Willis had friends of his confront Blaydes throughout fight week.

“Obviously I’m happy he’s no longer a part of the company,” Blaydes told TSN on Friday. “I don’t think that he had the skills or character to be a representative of this sport.”